Did you know that when you pick travel destinations based on flight times syncing with nap schedules you run the risk of not having a clue what there is to see when you get to said destination. Yeah, let that sink in – traveler of the year over here. 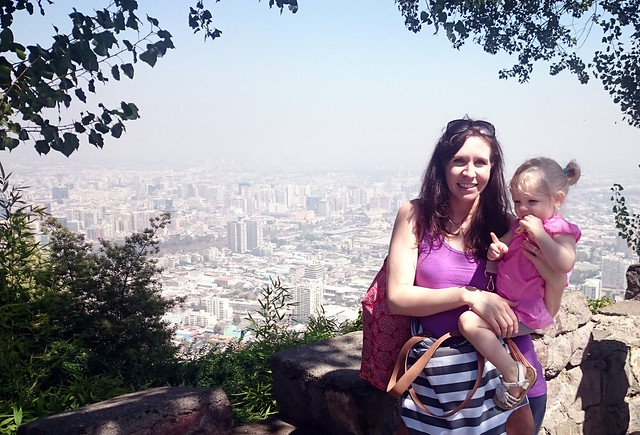 In the end, we may not have found Jesus, but I had also promised great views and I did deliver on that front.

It’s not that Mary isn’t cool – I mean the whole immaculate conception things is either the greatest miracle ever, or, depending on your personal religious beliefs, the most successful teen pregnancy scam ever – but she isn’t Jesus. Here’s how the mix-up happened:

So that’s the fail part. The good news is that it was still a cool place to see even if we didn’t know what we were seeing. First, we walked to the base of the cerro (which I know now to mean hill). There’s a zoo and some nice trails that head up from there. Since we had two toddlers in tow, we opted out of a hike and instead took the 91-year-old Funicular de Santiago up the hill.

Here is the lower station, present day. (Chile circa 2016)

By comparison, here it is in 1925, on it’s opening day. (photo from http://www.funicularsantiago.cl)

The funicular was very old and very steep and we made sure to get front row views. 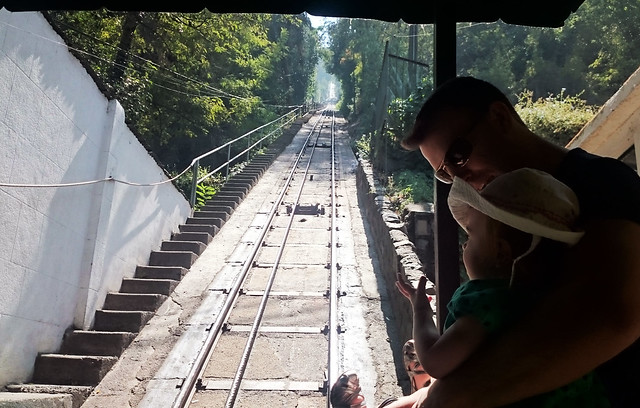 Paige and Andy, front and center on the way up the hill. (Chile circa 2016)

When we got to the top station, we still had a ways to go. There were a lot of stairs to climb which was hands down Millie’s favorite part of the whole entire trip. Lucky Andy happened to be holding Paige, who was content being carried up. Unlucky me, had Millie who, despite being tired and wobbly, insisted on climbing every single step. It was exhausting. 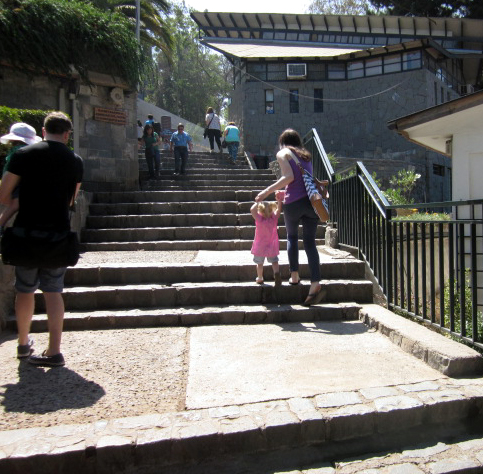 Here we are climbing. 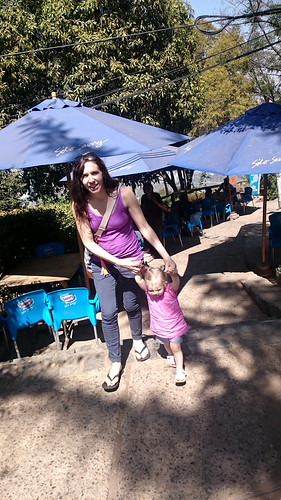 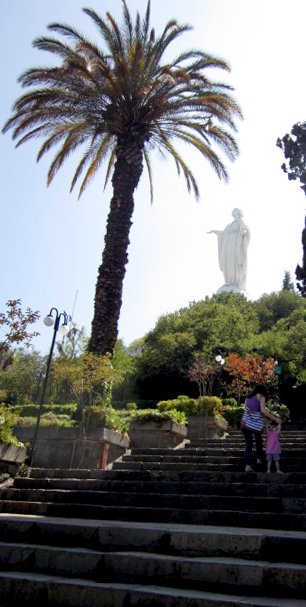 When we finally got to the top, we looked up. We said, “Yay! We get to see Jesus! But wait, the sun is in my eyes.” 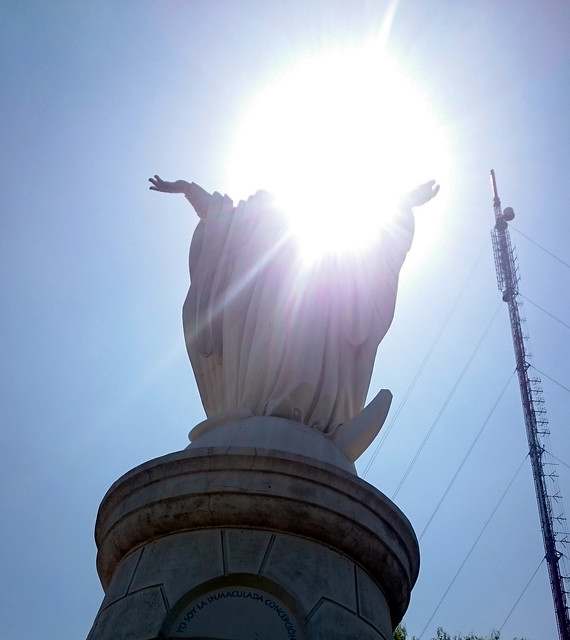 Oops. That is totally Mary. 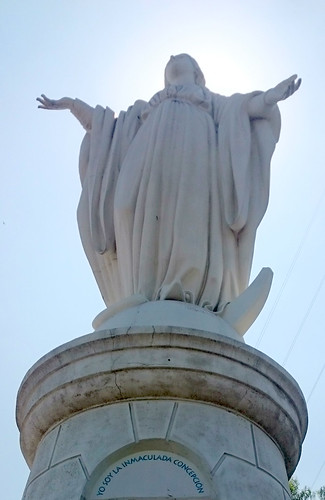 But like I said, Mary is still pretty special. Also, the views were indeed spectacular. We got to gaze out over part of the huge city that is home to some 5+ million people and beyond that (and a bit of fog and smog) we caught a glimpse of the Andes mountains as you can see in the picture below. 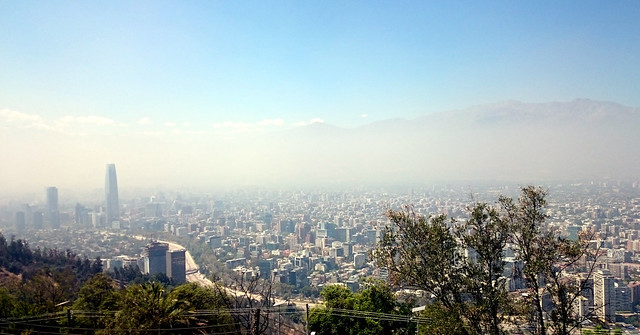 That tall building is the Gran Torre Santiago, the tallest building in South America. If you recall, a few years ago I have this story from one of the other tallest buildings on the continent and how we successfully got a knife past a ridiculous amount of security.

After we checked it all out, it was time to head back down and I was happy to note that even though we never found Jesus, we did see some crosses after all. 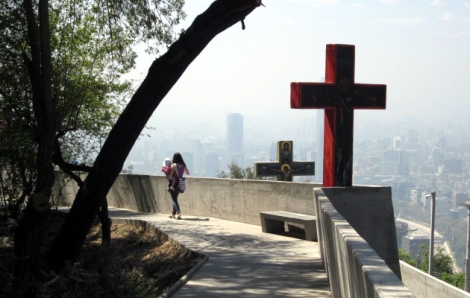 Also, I was happy to have found a ramp to walk down with Millie, thus successfully bypassing some of the stairs.

If you’ve ever wondered what a ride on a near-century old funicular looks like, here’s my video. As always, my commentary is super awkward. Below that are some more pictures. 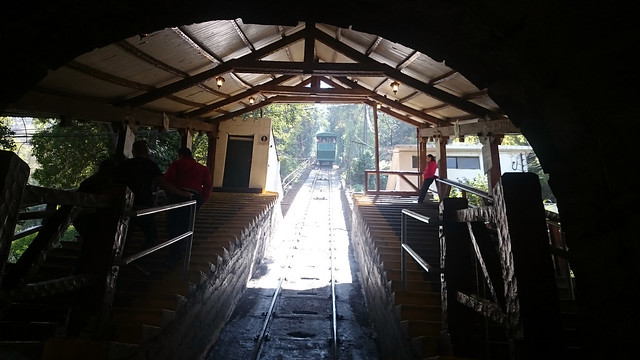 Waiting at the Pio Nono for the funicular car to arrive. 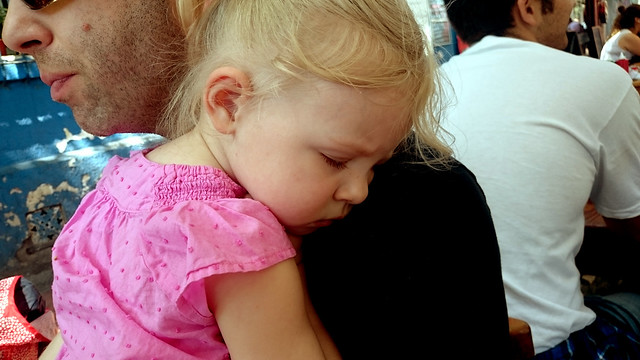 This is what happens when you climb so many stairs. You have to take a snooze on your dad’s shoulder while everyone else eats lunch. 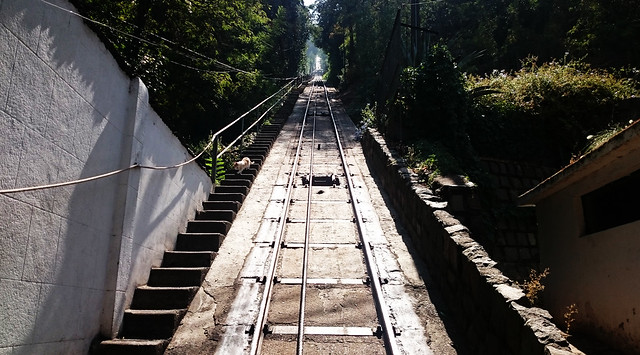 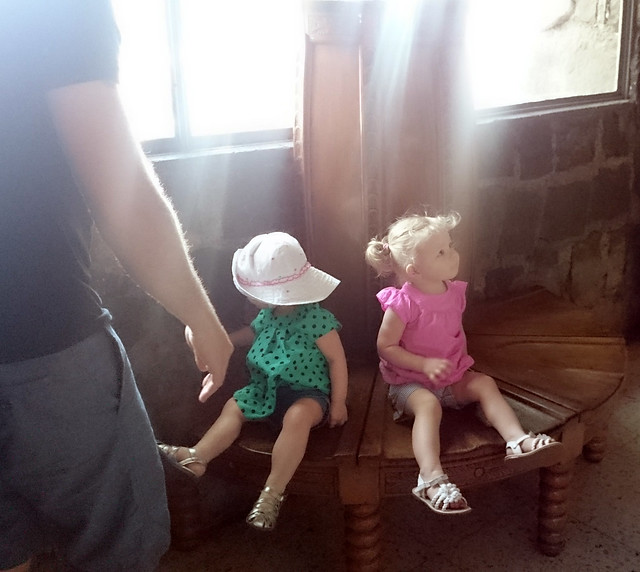