I’m feeling a little sad and a little jealous this morning. Before the sun was up, I took Andy to the airport. He won’t be gone long – just three short weeks – but he’s headed to a country that I’d love to visit and it’s hard to think about the fact that if I wasn’t six months pregnant I’d get to go there too. Overall, I’m not too bummed, but an airport goodbye combined with pregnancy hormones combined with not really liking being pregnant all makes me feel a little stuck.

Instead of feeling sorry for myself, which is ridiculous because I really do feel extremely lucky and blessed to be growing two kids inside of me, I decided to put together a post of some of my extra photos from our Dubai trip last spring – which in turn has reminded me of how lucky and blessed I’ve been to be able to go to so many wonderful places. So, while I wait for the little buns in my oven to finish cooking so I can drag them and Andy back to where he is headed right now, I hope you enjoy these little stories and photos. 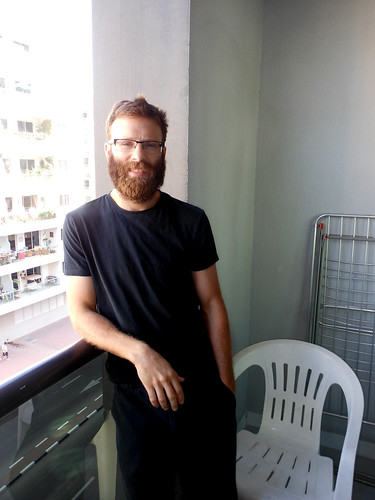 Towards the end of his job in Dhaka he’d started to talk about shaving it all off but I convinced him to keep it until I could get a picture. That’s one big beard. (UAE circa 2013)

And here we are, like, 5 seconds later on the same balcony: 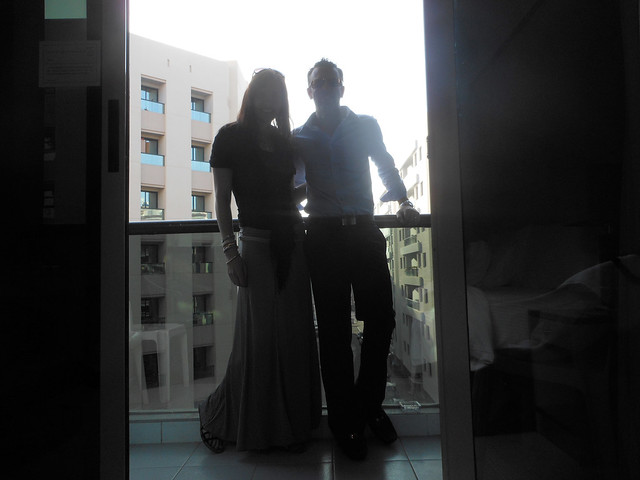 Just kidding, it was way more than five seconds later. It took some serious hacking to get through all that facial hair. Still, here we are that same morning. And I know, my photography skills are horrible. (UAE circa 2013) 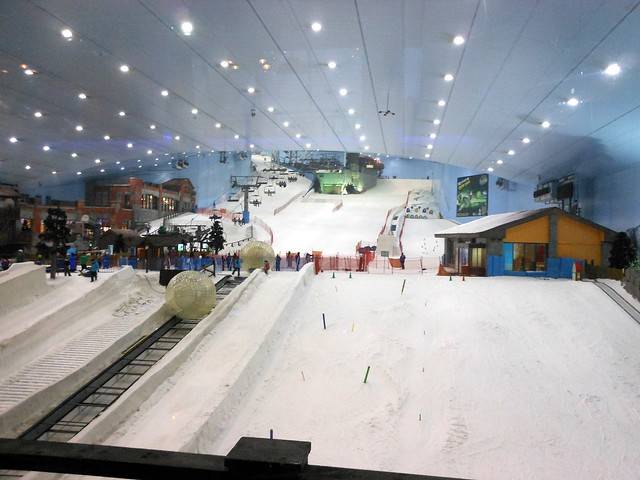 There was something really weird about watching people, all bundled up, skiing and playing in the snow while your forehead is still sticky with sweat from the scorching heat outside. I’m sorry. That’s gross. I don’t know why I said that. (UAE circa 2013)

At a nearby restaurant we’d grabbed a table with a prime view of the slopes but when the bartender asked for our drink order, we were stumped. Normally we would have tried a local brew or spirit, but since Dubai is in a Muslim country, no such thing exists. The A/C was running full blast in the mall and because of the view, we felt like we were in a chilly ski lodge… so do we get a hot toddy or something of the like? Or, since we’d been sweating it out in the hot sun all day before we hit the mall, would something cool and refreshing be better? I know, right? The kinds of tough decisions we run into when we travel… 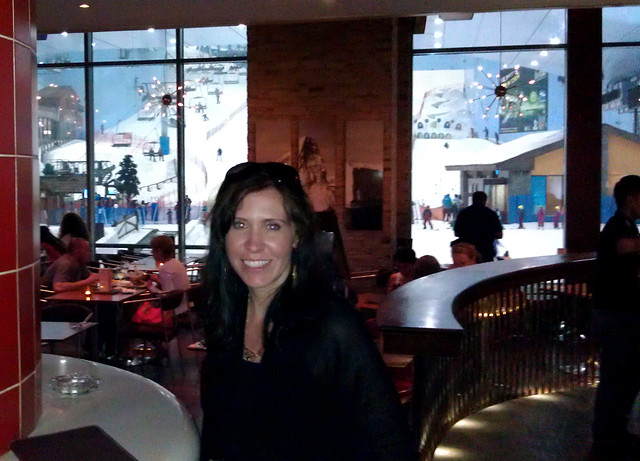 As you can see, I’m fraught with worry over this decision. (UAE circa 2013)

In the end I opted for a Dos Equis because sipping a cool Mexican beer while watching people in the cold snow in the middle of a massive Middle Eastern mall seemed to make as much sense as anything else. 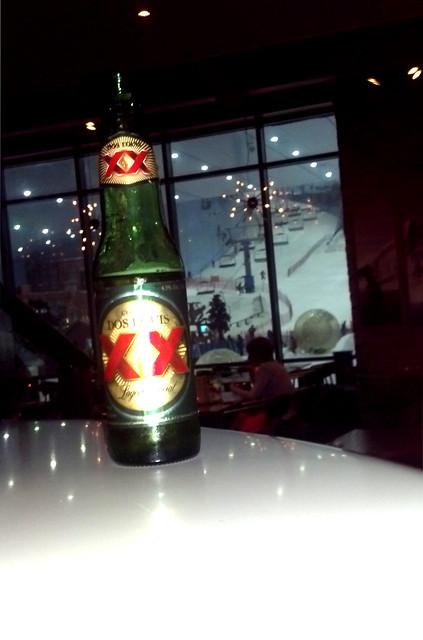 Also, the bartender had other customers and I sort of panicked and got the first beer I recognized. (UAE circa 2013) 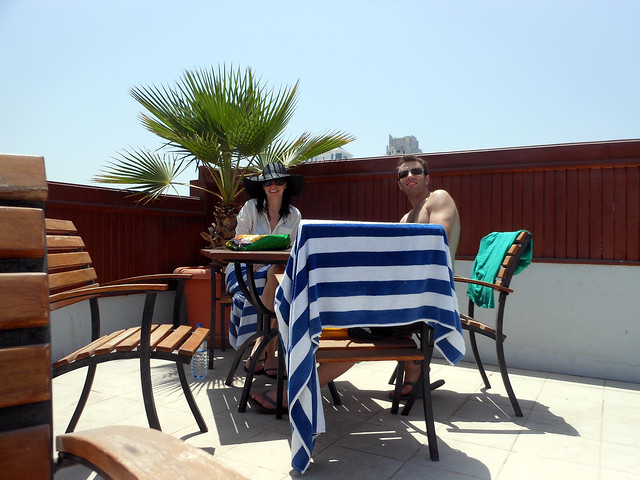 Here’s what wasn’t awkward… enjoying the sun. Or, in my case, trying not to get sunburned. (UAE circa 2013)

The whole pool area was almost completely empty every time we went up for a quick dip – except for the very bored lifeguard. Each time anyone got in the water, he would drag his little lifeguard stand to the edge of the pool to guard our lives. The thing is, the pool was very small and while this tedious back and forth was clearly part of his job description, it seemed comically unnecessary. 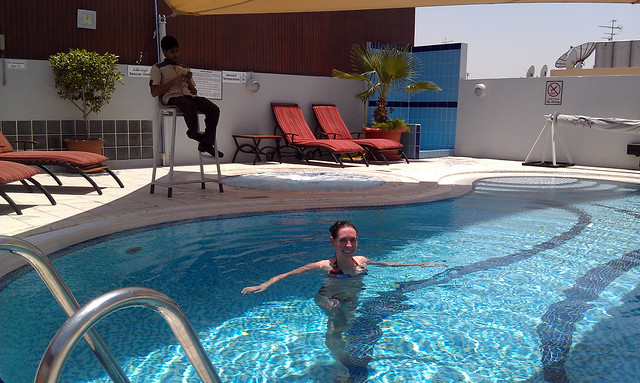 I would have preferred to alternate between sunning in the deck chairs and taking quick dips, but, since each time I switched activities, he had to move his lifeguard stand back and forth, I felt obligated to pick either one or the other. It was odd.(UAE circa 2013)

I kind of felt sorry for the guy; it just seemed so boring. But also, I felt sorry for me; it was just so uncomfortable. I’m not exactly comfortable in a swimming suit in the best of times; you can plop me down on a nude beach in Europe and I’ll still be the one tugging at my suit, feeling too exposed. But there we were, in a country where cultural norms dictate that women cover up and there I was, in a bathing suit with my own personal lifeguard.

Even though everything I’d read ahead of time and everything I saw there told me that regular swim attire is completely appropriate at pools or beaches, it didn’t make the situation any less awkward. Although it did seem that I was alone in my shame-induced anguish because no one else seemed to mind the four-feet-from-your-face life-guarding – not the French women in skimpy bikinis nor the Muslim women in conservative one-pieces. It was just me, the lone American woman – raised to be equal parts PC-obsessed as well as cover-your-jiggly-thighs-obsessed. I didn’t want to be inappropriate and I didn’t want people staring at my less than toned tummy. 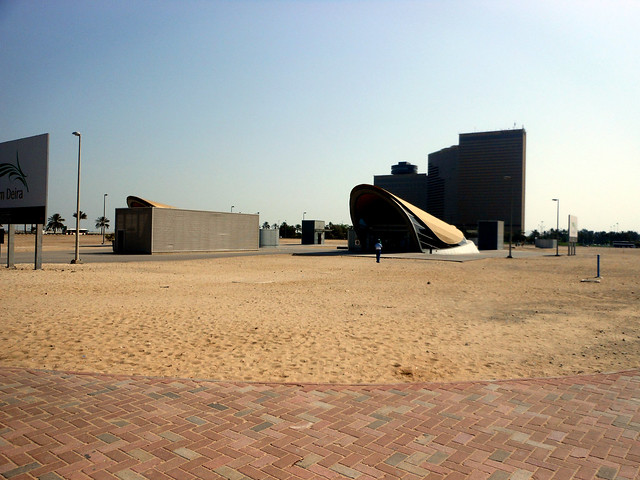 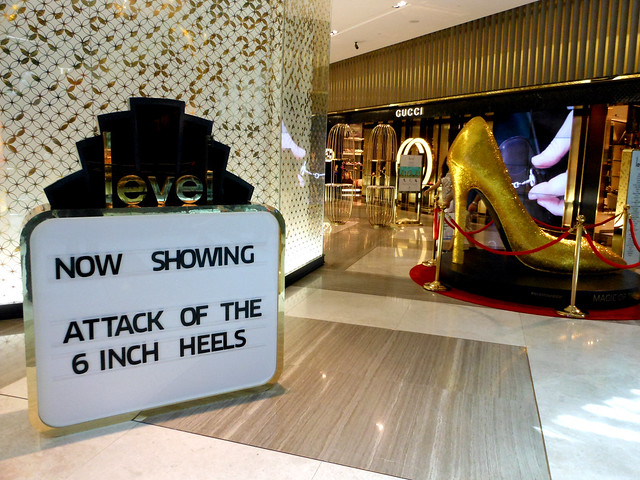 I’ve never seen a mall set up quite this way before. Different areas of the mall were dedicated to selling different things. For instance, the shoe section of Bloomingdales was in the mall’s shoe district alongside the Gucci store’s shoe section. Whereas the dress sections of those stores were in another part of the mall. I kind of liked it. (UAE circa 2013)

And that concludes the Dubai edition of Extra Snapshots. Also, I’m only two posts into my massive drafts category so I have lots to keep me busy (and the blog interesting) until the girls are here.