While growing up, save from the occasional Quarter Pounder with cheese on long road trips, I almost never ate at McDonald’s. When I struck out on my own at 18, I still reserved any Fillet-O-Fish consumption for late nights on occasional drives between my hometown and my college town. Nowadays, since I married a man with a magical metabolism and a slightly more-than-occasional hankering for Big Macs, I have a few more McFlurries than I’d like to admit to, but still, I only hit up those golden arches a few times a year. 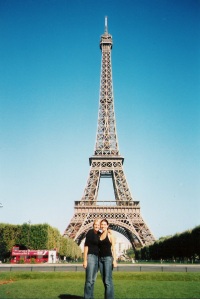 We may look happy.. but we were in a dark (but skinny) place! Being poor did wonders for our waistlines!

Hands down, the period in my life when I ate the most McDonald’s was the summer between my junior and senior years of college. What caused me to eat so much of this evil food you may ask? I was backpacking around Europe with my sister. Yes, the same sister who hasn’t had a single bite of McDonald’s food in years. Not since she once hid out in one for over five hours in Istanbul to avoid a certain Turkish man. On all other fronts, that summer was the perfect, quintessential summer that college kids dream about, but from a gastronomical standpoint, we were in a dark, dark place.

We ate the best when we stayed at hostels with kitchen facilities… yummy fondue in Switzerland? Yes Please!

That summer, we had no extra money for fancy things like real food. We saw cheap sights, stayed in cheap hostels, drank cheap beer and hung out with other cheap tourists and locals. For sustenance, we ate out of grocery stores. We carried with us, from town to town and country to country, a loaf of bread and a jar of peanut butter for breakfasts. For lunches, we’d usually buy a small amount of meat and cheese to pair with our bread to make sandwiches (yay sandwiches!) and for dinners we mostly lived on cold, canned ravioli (pasta sandwiches!).

And then, BAM! Sunday. To make matters worse, dreaded Sundays always seemed to show up on the day after we’d used the last of our bread. We would wake up in some amazing foreign town, ready to enjoy the heck out of our day, only to have our spirits dashed as we got to the grocery store saw a Cerrado/Geschlossen/Chiuso sign on the doors. “Ugh! Sunday again!” we’d say to each other, once again shocked and disappointed that we hadn’t planned ahead. 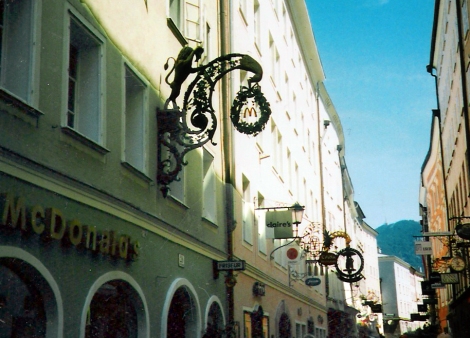 Getreidegasse Street in Salzburg, Austria. We didn’t eat here but it sure had a fancy sign.

So we’d try and get by on a spoonful or two of peanut butter and we’d keep our eyes peeled for any place that might have cheap eats – almost always to no avail. By mid-afternoon we’d be more than a little peckish because, as you can imagine, our transportation budget was even worse off than our food budget and we were burning copious amounts of calories walking all over the place. It was usually in the evening that we’d spot them – those brightly lit, golden arches. Our famished tummies were yelling at us, “Stop being so damn cheap and just buy some food already,” and we would give in, all while promising ourselves that next Sunday we’d be prepared. Regrettably, we usually weren’t.

If something as predictable as the days of a week can continually screw me up when traveling, just imagine what kind of havoc daylight savings could wreak. Fun fact: The world does not observe daylight savings time changes simultaneously. For example, the time changes in the United States tomorrow but it doesn’t change in Europe until March 25th. Seriously? Are the time change experts just trying to mess with us?

John Travolta ate McDonald’s in Europe and he’s pretty cool… so it must be okay.

In the spring of my sophomore year in college, we sprung ahead and all was well in my little world. Then, about a week later, I left to study abroad in Europe. I was in Italy and completely unbeknownst to me, the time changed again. Only this time, it didn’t go so smoothly. This time, I was in Sienna, trying to catch a train to take me to Milan to catch a plane that would take me to Madrid to catch another train that would take me to Santander. It was a travel day from dawn to way past dusk and it wasn’t until a few days after the fact that I finally figured out why the whole day had been thrown so far off it’s course. At the time, I had blamed poor planning and a massive hangover, but apparently, I’d been late, had to change tickets, buy new tickets and essentially rework my whole schedule because of the time change. It was a big, confusing, mess of a day.

So the moral of the story is, set your clocks forward tonight and if you happen to be leaving for Europe next week, plan accordingly. Also, if you’re broke and traveling, under no circumstances should you ever have McDonald’s on a Saturday. The following day will inevitably be Sunday, and sometimes on a Sunday, McDonald’s is the only choice. That’s just the way it goes.

5 responses to “Travel Fail: Daylight savings and never eat a Big Mac on a Saturday”