I’m sure you’ve heard of the Dead Sea – where the salt levels are so intense that you can just float without any effort. Before our Chile trip, I didn’t know there were other places like that. I guess if I’d ever stopped to consider it, I might have realized that salt isn’t rare and a lake filled with it probably isn’t a once-on-a-planet type phenomenon, but I’d never given it much thought. If you also have never gotten around to seeing if other such places exists, I’ll go ahead and tell you, they do – and one is in the Atacama Desert in Northern Chile. 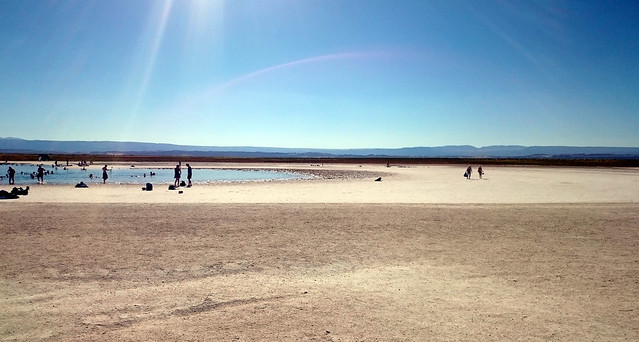 I’d read about Laguna Cejar before we arrived in the nearby town in San Pedro de Atacama, our last Chilean stop, but most guidebooks aren’t expecting their readers to be toting around two toddlers, so I wasn’t sure if this excursion would be doable or not. Thankfully, the gal at the excursion office hardly batted an eye when we inquired about joining in on the afternoon tour. Well, maybe there was a little bit of batting, but she didn’t forbid it so we went ahead and booked it. After a quick nap back at the hotel and a trek back into town we boarded the shuttle and off we went. 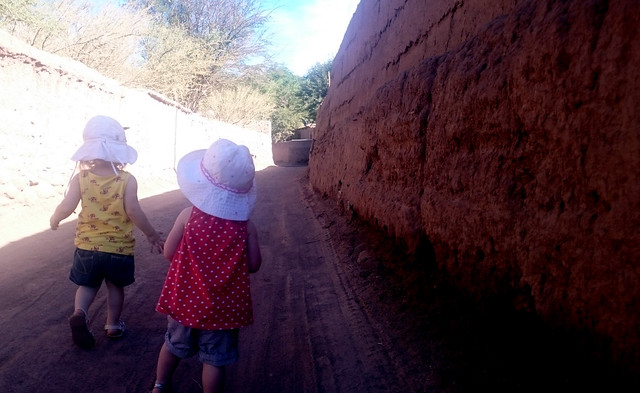 Here we are trekking. 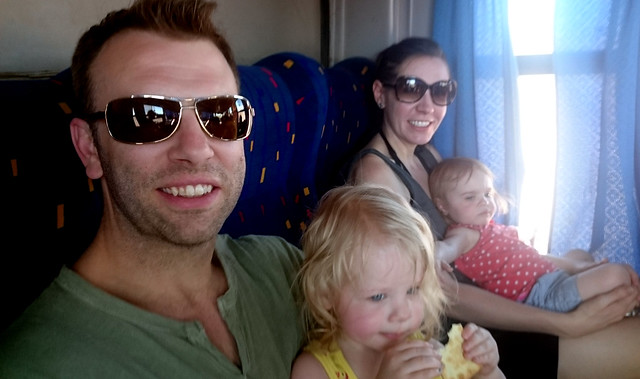 And here we are shuttling.

As we bumped through the hot, barren desert I was thankful for the shuttle’s A/C, the shade of its curtains and the and the super-high SPF sunblock that we’d slathered on our pale, Pacific Northwest kids. As we neared the lake, which is owned by the indigenous people, it was explained to us that to help preserve the fragile ecosystem, we would have to rinse all our sunblock off before we entered the lake. 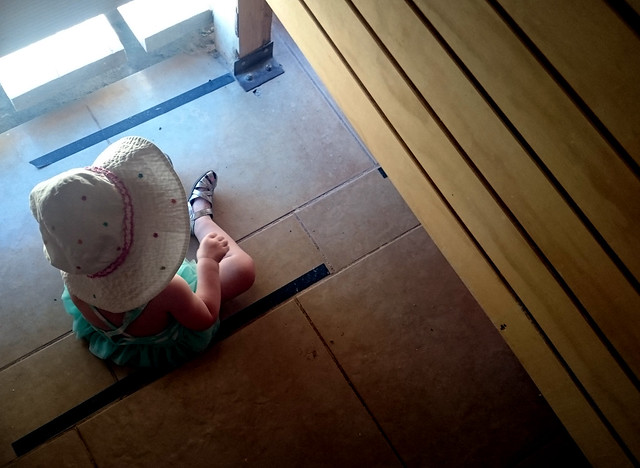 Here is Paige, sitting on the changing room floor, mentally prepping herself for the sunscreen rinse-off shower.

I’m a hardcore rule-follower and I took slight offense to being so singled out on this. Especially when other visitors, who were being less than sneaky about sunscreen slathering, were skating by unnoticed by the sunscreen security. Still, there must have been something about us and our two ghost-white toddlers that had them on high alert – which I believe is called profiling. 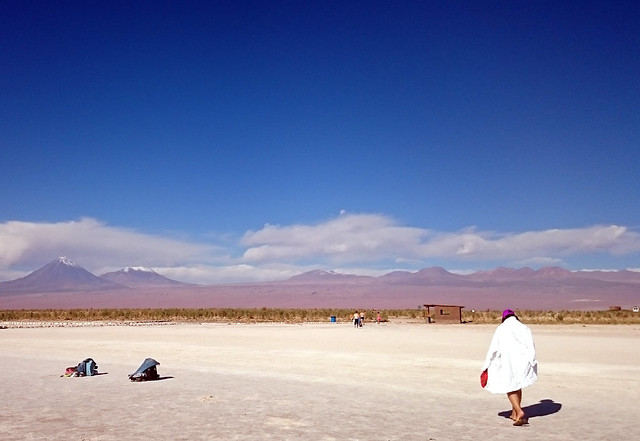 Here’s the white-hot path heading back to the changing rooms from the lake.

We then made our way past Laguna Cejar (which was completely off-limits) and headed down to a different lake. This part still confuses me because Cejar was the name used in the guide book, online and at the excursion office. The two lakes seemed to be similar in size and in surroundings so I’m not sure why the one was more important therefore completely untouchable. Also, seeing as, for whatever reason, that was the case, why couldn’t have just named the excursion after the one we swam in? The poor thing didn’t even seem to have a name at all.

Google agrees with them, that lake is a nobody.

Once we reached the water, we had to convince the girls that swimming is more than just wearing cute, ruffled bathing suits that took up half the packing space in our luggage. To actually swim, one must physically enter the water; they were unsure but eventually got on board. I remember my sister telling me that when she swam in the Dead Sea, she couldn’t really wade into the water because once you got past waist-deep, you’d start to bob instead. This, more or less, held true here as well. Although waist-deep for some of us would happen a bit sooner than for others.

Once we got in, it was crazy. You just floated. Just like that… no effort involved!

So staying afloat was super simple but swimming? Swimming was crazy hard. At one point I floated on my back out to the center of the lake. It was so easy breezy and an overall surreal experience. Then, when I tried to swim back it was a disaster; my body was too high up to swim normally and I sort of just floundered around clumsily. I eventually I decided that someone might think I was in actual distress if I kept carrying on that way so I gave up, ungracefully flipped back over again and slowly paddled to shore.

After what we felt like was as much time without sunscreen as we could all handle, we emerged from the lake only to find that instead of water droplets on our skin, everything immediately turned to salt crystals. This was so bizarre. You might think it would feel the same as if you had just gotten a little sandy but it was way more extreme. There was salt on everything! Our hair was crusted with salt, our skin was crusted with salt and swimming suits were crusted with salt. 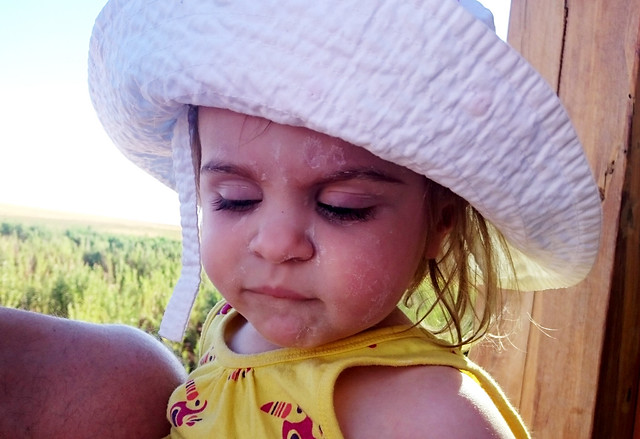 Poor Paige instantly regretted doing so much splashing once the water on her face dried – and this picture was taken after her rinse-off shower. Did you hear me? I said after the rinse-off shower!

In the end, the excursion was a great success. The girls had fun, we had fun and unbelievably, no one got sunburned. Although, to be completely honest, knowing full well that the girls wouldn’t be dunking their heads under the water, I had done a slightly shoddy job of completely ridding their faces of sunscreen.

Here are the details of the excursion, or at least as many as I can remember:

What: The Laguna Cejar tour. We also stopped at a few other swimming holes and spent dusk along the salt flats. (I’ll get to that in another post)

Who: Anyone! We took toddlers and had fun and there were some elderly people fully enjoying themselves, although they would have to have been able enough to traverse the path down (less than a five minute walk, but it was very hot.)

Where: About 40 minutes drive from San Pedro de Atacama. I think I remember someone saying it was about a 2 hour bike ride.

When: Our tour left at 4 PM and returned around 9 PM. It’s my understanding that most of the tour groups stick to this general time frame as well. Although if you’re renting a car or up for an intense bike ride, you could probably go whenever as long as it was open (information that would require a bit more online sleuthing.) 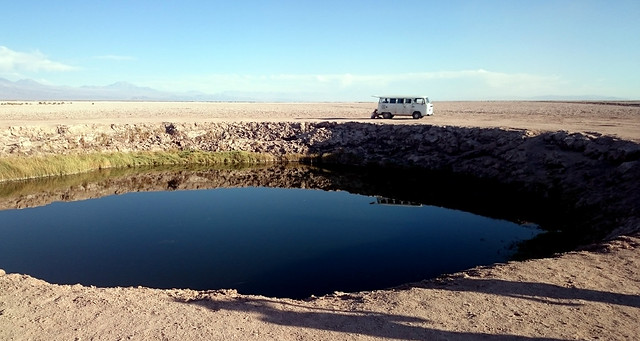 Here are some people, at another lake that we stopped at on our excursion, who had opted to take their own transportation. They looked cool; like the kind of people who would never be tied down by an excursion start or end time. 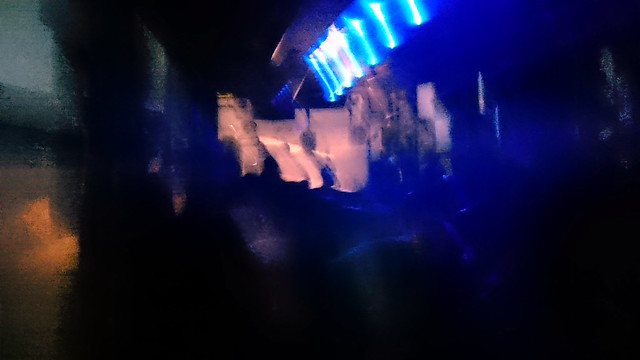 Here is a shot of the bumpy bus ride back that night. The girls thought each bump was hilarious so I tried to capture the moment on film. As always, my photography is breathtaking.

One response to “See Jules Review: Laguna Cejar (or more accurately, the poor nameless lake next to it)”