I like to joke that you can’t fake French – to which you could argue that it’s pretty hard to fake any language. When I say this, I don’t mean that one might have an easier time faking Japanese or Arabic, I mean that when compared to other Romance langues like Portuguese or Italian, where my Spanish helps me get by, French, to me at least, is another linguistic animal entirely. Ergo, you can’t fake French.

Mostly, this hasn’t really affected me. For being a fairly seasoned traveler, I haven’t dealt with French all that much. Other than a few flyby (railby?) trips through Gare du Nord, a couple quick peeks at the Eiffel Tower and one ill-fated night spent sleeping in a random Paris metro station, I’ve never even stayed a night in any French speaking country.* That is, until we went to Belgium this last fall. 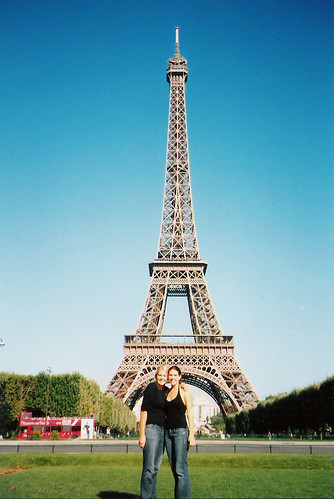 Sure, it looks like I’ve traveled around France, but I swear, what I’ve done, hardly counts. (France circa 2004)

Belgium has three official languages: Dutch, French and German. People were friendly and English is widely spoken so it wasn’t too hard to get by. The time that the language barrier seemed the most palpable was when were were at restaurants. With two wiggly toddlers, we hardly had much time to pour over menus or scavenge some nearby wifi and do on-the-go Google translations. Also, it’s not that I’ve never been to French restaurants, but when I have, they’ve been fancy, special occasion restaurants where you order duck confit or filet mignon. The problem with this being my only frame of reference is that:

A. We weren’t in France so even though the menus were in French, we weren’t eating French cuisine.

B. We were hardly patronizing fancy places like that with two toddlers in tow. 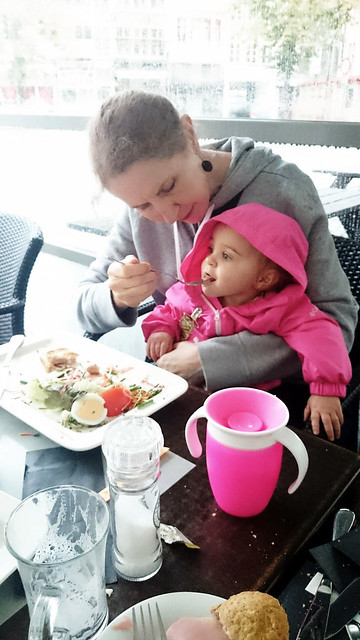 We preferred places where it wasn’t weird to bring your own sippy cup like Paige did here with my mom in Mechelen. (Belgium circa 2015)

Luckily, my love of sandwiches did me a favor. It’s possible that I know more sandwiches of the world than most; croque-madames and croque-monsieurs frequently make their way into our monthly dinner rotations. For those of you who don’t know, these are just fancy ham and cheese sandwiches made with bread that’s been dipped in egg (kind of like a savory French toast) and then baked or fried and topped with an egg (madame version only). These popped up on a lot of menus so I tended to order those for myself and the kids. Easy peasy. Except we weren’t quite sure we were getting a well-rounded culinary experience, so each time we sat down at a restaurant, we’d have the same discussion, lamenting our inability to understand anything else.

That is, until Andy and I pulled up chairs at a little restaurant in Dinant. It was nap time for the girls and my mom had opted to stay with them so Andy and I could have a little mid-afternoon date. Unpredictable sleep schedules because of the time difference had made the girls a little nuts so we chose the restaurant directly under our Airbnb apartment. That way, if anything got too crazy, my mom could simply call down to us for backup.

From the second I opened the menu, I felt at ease. I perused the appetizers, I eyed the soups and salads and finally settled on an entree. The selection seemed great, better than any place we’d been so far. We didn’t really talk about it, I mean, this being our first time out without the kids since he’s left for Europe six weeks prior meant we had other things to chat about, but still, neither of us got croque-monsieurs and we both thoroughly enjoyed our meals. I mostly chalked up the enjoyable ordering experience to the fact that we weren’t digging sippy cups out of my purse or thwarting flying forks but I also felt like maybe, just maybe, we were simply getting better at French menus.

We knew it was our cue to head back when we saw Grandma and baby Paige saying “hi” out the window above us. (Belgium circa 2015)

The next afternoon we repeated the experience. As we were approaching the familiar outdoor tables, I think I mentioned something about our new-found skill of deciphering French menus and, if memory serves, Andy wholeheartedly agreed. Then we sat down and looked at the menu and saw that our confidence was based on a false pretense.

Guys, the menu wasn’t even in French; it was in Italian.

Now, don’t get me wrong, I don’t speak Italian, but it does fall under the category of languages I can fake, especially if we’re just talking about a menu. It’s not a big leap to get to frutos del mar from frutti di mare and antipasto is pretty darn close to appetizer in both English and Spanish. Also, while I’ve mostly only been to French restaurants sparingly and on special occasions, the same absolutely does not hold true for Italian restaurants. Sure, I’ve been to some fancy ones, but in broad terms, the Pizza Hut down the road also counts as Italian. Italian food has played a much larger role in my culinary upbringing than French food. Lets just say things like spaghetti, lasagna and ravioli ended up on my dinner plate at home much more frequently than foie gras or steak tartare.

So in closing, we weren’t getting better at French; we were getting worse at simply knowing what the hell was going on around us. I can blame it on the sleep deprivation, but even those of us who are half zombies should know better than to think that sleep deprivation would lead to enhanced language development.

I guess all that you can do is say bon appétit and sit back and enjoy your pizza. Which I did, even if it was off of an Italian menu, mentally translated to Spanish that I would have sworn was in French all while at a restaurant in Belgium. Sleep deprived or not, that’s quite the thing to wrap your head around. 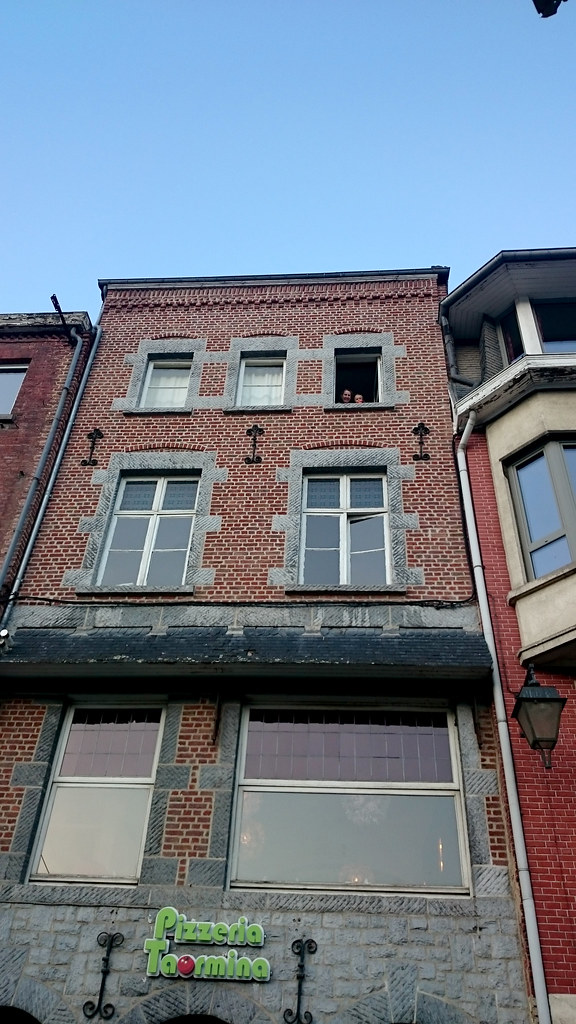 Another one of my mom and Paige peeking down at us. (Belgium circa 2015)

*I’m not counting Switzerland in this tally because, let’s be serious, they have like a million official languages and French is only one of them.

One response to “Travel Fail: I trick myself into thinking I speak French”