Last summer, after a wedding rehearsal dinner, a few of my friends and I had one of those meaningful conversations that, at the end of my life, I will look back on and think, ‘Wow, that was a special moment’. Just kidding – we were talking about our hair, more specifically, how frequently we wash it.

While the conversation wasn’t really meaningful, it was memorable – mostly because it ended with a hilarious comment that if it hadn’t been so damn funny, it would have been rude. I was talking with two of the other bridesmaids who are good friends of mine and also one of the groomsmen’s girlfriends, who we had just met that night. We were discussing that although we’d all heard it’s best for your tresses to not suds them up daily, abstaining from shampooing can be a challenge if it means having greasy hair at work. One friend, who happen to be very pregnant at the time, commented that she generally washes her hair in accordance with her workout schedule, washing on days she hits the gym and skipping it on days she doesn’t. To this, our new friend couldn’t contain her astonishment and confusion and blurted out, “You mean, you don’t work out every day?!”

Her outburst was so genuine that it makes me think it’s quite possible that she’d literally never met anyone who didn’t religiously work up a daily sweat. (On a side note, she looked like she did.) Then, realizing that she might have said something slightly offensive she quickly backpedaled by adding, “Oh, but you’re pregnant, so it’s okay.” To which my other friend and I couldn’t contain our laughter because if carrying a little miracle in one’s uterus is the only viable excuse for being a lazy piece of crap, what the hell was our problem? Maybe you had to be there, but it was really comical.

Here is a picture of my two friends and I on a very different day. Now while I agree we might not be winning any body-building contests, I think we all look just fine despite the fact that we’ve all skipped a workout here and there. Although, at this moment we were on a nature amble so I think that counts.

So the moral of that little story is if you wash your hair every day you don’t have an excuse to skip the gym.

What this has to do with traveling is that right now my hair is greasy. All too quickly, I fall into the trap of washing my hair daily and it’s just so hard for me to stop. It’s like crack to me and it takes all my willpower to keep from reaching for that bottle each morning in the shower – don’t be fooled though, this absolutely does not mean I work out a lot. My hair is greasy right now because I have a trip coming up and reducing the frequency of shampoos is just one of the things I do to ready myself for travels.

Here’s what happens if I don’t: I become a greasy, disheveled mess by the time my head hits the airplane pillow on my first flight. By the second or third flight, you might as well just assume I’ve been living on the streets for a month. I tried to find a picture of my hair looking truly heinous but I think I’ve threatened death on anyone who’s tried to take a photo of me in such a state… even my dear dad, who, bless his heart, loves to take photos of his daughters when they look their very worst.

Here’s what happens if I succeed: My hair, having gotten used to not needing to provide itself with enough daily oil to counteract my overzealous shampooing, reacts to a long travel day like a normal head of hair. I may not be winning any beauty contests, but it’s nothing a quick braid and a shot of dry shampoo can’t mask. 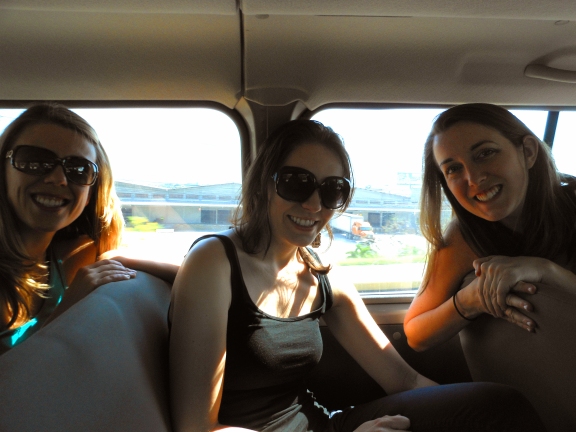 This photo was taken after we landed in San Pedro Sula – you remember, the murder capital of the world. Here, my hair is tolerable. I’m noticing now that  both my friends are rocking beautiful, bouncy, hair-down styles. Those sneaky little minxes… did they somehow manage to sneak in a quick shower between the plane and the shuttle?

Other purely superficial travel prep tips are to always pluck your eyebrows and give yourself a quick mani/pedi. There’s nothing worse than realizing your eyebrows are out of whack when you’re half way around the world without access to tweezers. Yes, I’ve tried to pluck with all kinds of other objects and no, it’s never worked. FYI, two keys pinched together offer very little in the way of plucking precision.

Another, less cosmetic, thing I do when a trip is approaching is to prep my stomach by eating yogurt – it can help ward off future stomach bugs. Travelers, unfortunately, are prone to stomach issues. Unless, of course, you’re my husband who happens to have Superman’s stomach.

I wouldn’t trade my childhood for anything; I mean, my mom and dad are pretty great, I had a lot of fun times with my sister and I even got a whale! Still, if I had to choose one thing to covet from Andy’s childhood, it would be that he was exposed to a lot more germs than I and therefore, has an immune system made of steel. 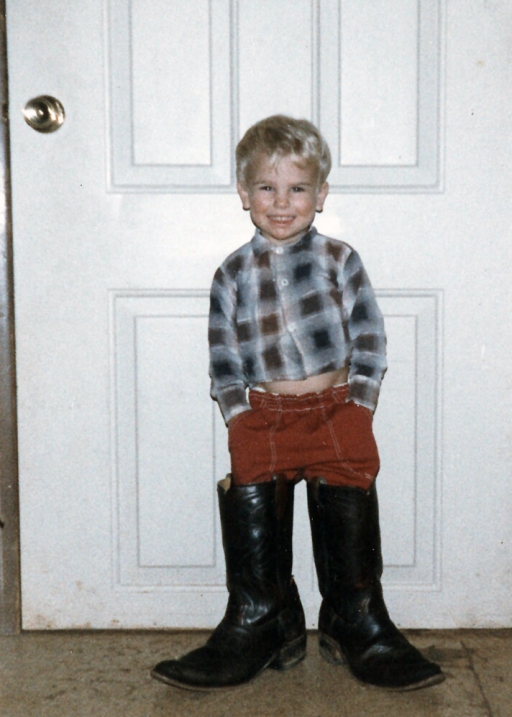 This is little Andy. Even at this age I bet his stomach was lined with steel. Also, speaking of stomachs, I find it hilarious that he is wearing … what… a cropped flannel shirt? Still though, pretty adorable if you ask me.

My mom, while she thankfully was far from dousing us in hand sanitizer like some moms do today, followed normal hygienic standards like having us wash our hands before eating and stuff like that. I know, she sounds just terrible, right? Andy, on the other hand, grew up largely unsupervised, running around a mountain getting into all kinds of crazy stuff and even playing in a yard that a septic dye test later revealed to have sewage leakage. While that is definitely gross… what didn’t kill him made him stronger and that man has only gotten sick once in the entire time we’ve been married.

While my friends Randie and Taylor wisely kept to the dock in this shot, Andy probably could have jumped in that garbage water and made a snow angel and come away from it just find – that lucky bastard.

So while my husband might be able to gallivant around the world sans any concern for his health, us mortals should grab some yogurt before we jet off abroad. Also, us mortals who don’t work out every day should skip a shampoo now and then.

Even with this prep, I might not end up feeling tip-top throughout my entire next trip and I can almost assure you that my hair won’t be perfectly coiffed the whole time I’m in Dubai. Still, I will have done a few things to get me one step closer to a travel triumph – although, probably what I should have been doing for the past few years is licking the street gutters in Old Town and just committing to dread locks already!

Is there any particular thing you do to get ready for a trip? Leave you thoughts in the comments!