I almost named this post something about how Andy would make a good arms smuggler but changed my mind in case the government failed to see the humor in it. Still, last summer in Colombia while sightseeing in Bogotá, we accidentally discovered that he might have a knack for it – despite massive amounts of security measures meant to prohibit such things. 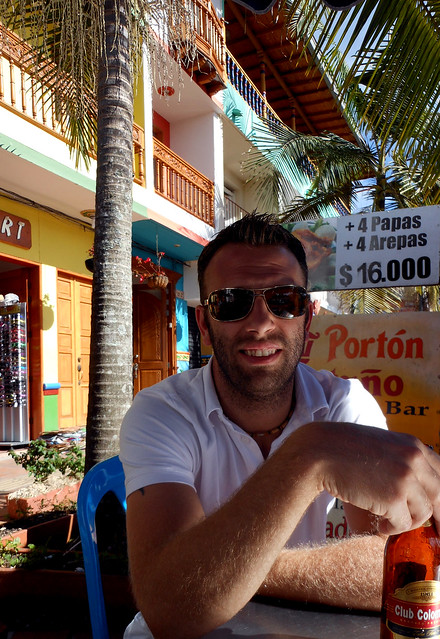 It must be his honest face. (This was taken later on that same trip.)

The nefarious deed took place at the Colpatria Tower (Torre Colpatria) in downtown Bogotá. The building is a bank building and, according to Wikipedia, it’s the tallest building in the country and the second tallest building on the continent. It also has an observation deck on its 47th floor that is ridiculously complicated to visit. I’ll address that part of the story first.

When I’d read about the observation deck I was really excited to check it out. Bogotá is such a massive city and those are always interesting to see from high vantage points. (Bogotá’s population is a cool 8 million which puts it between New York and Hong Kong on the big cities of the world chart.) Our plan was to fit in a quick stop up to the top between our uncharacteristic trip to the flea market and lunch. 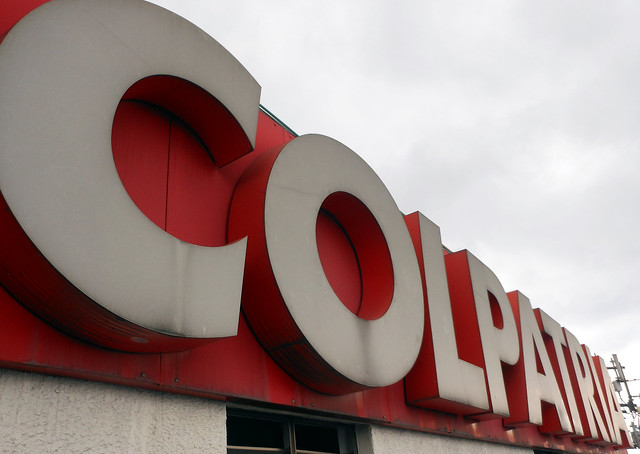 Here’s what we thought was going to happen:

As it turns out, it was a bit more involved than just that… here’s what actually happened:

It was the weekend and the main front doors were closed. This left some side doors with (seemingly) high security and no posted signs for an observation deck. There were three people standing outside the door waiting for the security personnel to unlock it. We stood awkwardly behind them to form a makeshift line, fully assuming that we were in the wrong place.

After some back and forth with the security guard (in Spanish, so who knows what was said) the people in front of us were ushered in. The guard paid no attention to us before closing and relocking the door. We watched through the glass doors as the people had their bags thoroughly examined before placing them on a conveyor belt to have them X-rayed. After a brief pat-down, the people proceeded to the desk where they answered questions and filled out paperwork. Finally, they were electronically fingerprinted and then taken to another fingerprint scanner before walking through some metal detectors and being escorted around the corner.  At this point we were absolutely sure we were in the wrong place but we stayed put, figuring we could at least ask the guard where we were supposed to go. 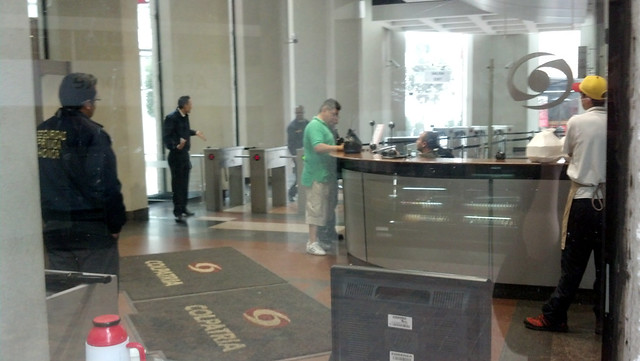 Other than all the security personnel, the place was pretty empty.

Instead, when the guard opened the door and we asked where to go he answered, “Aquí” and led us inside. Then, we proceeded to go through through the whole ordeal that we’d just witnessed. Bags searched, bags X-rayed, body patted down, passports scanned, paperwork filled out and fingerprints scanned.

Next, one of the ladies behind the counter set out to explain something or other. Realizing that we were total morons who didn’t have a clue what she was talking about, the other ladies behind the desk and the various security guards all chimed in, trying to get some point across. Finally, one of the ladies pointed upwards and said, “¿Observación?” to which we said, “Sí.” At this point they all started shaking their heads and further conferred about how to get us to understand what they were saying.

Once again, we were pretty sure we were in the wrong place.

Then, someone said something about lluvia which means rain. I repeated the word and then asked if it maybe wasn’t possible to go up because of the light rain – which seemed to be the only logical thing they would be trying to tell us. They all seemed delighted that we finally understood. I translated what I thought might be going on to Andy and we both stood there, a little confused as to why we’d gone through the whole security process if the observation deck was, in fact, closed. And what about those three people ahead of us? Did they somehow get a rain waiver? I mean, if there was such a thing, we should totally be eligible – we’re from Portland after all.

Next, the woman behind the counter asked for 3,000 COP each (about $3 total) and again pointed upwards saying, “Observación” and waved us toward the metal detectors.

3. Take elevator to the appropriate floor.

We were ushered towards the metal detectors but before we could proceed we had our fingers scanned again to ensure that we hadn’t somehow morphed into someone else in the ten steps between the counter and the detectors. We hadn’t, so we got to proceed.

Next we were escorted by a guard to an elevator and he waited with us until it arrived. It was manned by another guard who rode up with us. After we exited the elevator we were met by yet another guard who asked for our tickets and our passports. Upon inspection he waved us on.

And then, despite all that crazy security, we found ourselves on our own and not quite sure where to go. We walked down an empty hallway until we got to a roped off section and turned around, confused. 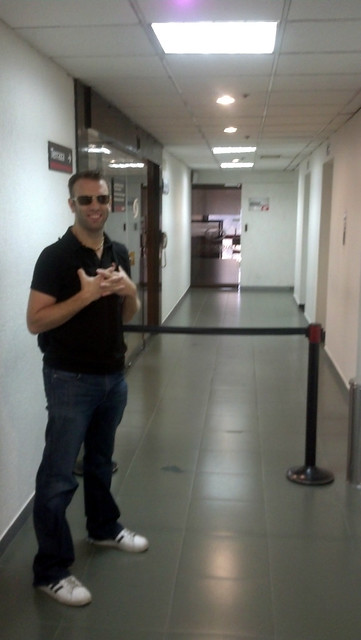 All that security until this – which could have been easily stepped around. It’s a mystery.

Thankfully, a random woman, who looked quite surprised to see us, appeared in the hallway and pointed us towards an unmarked door. We went through the door and found some stairs. 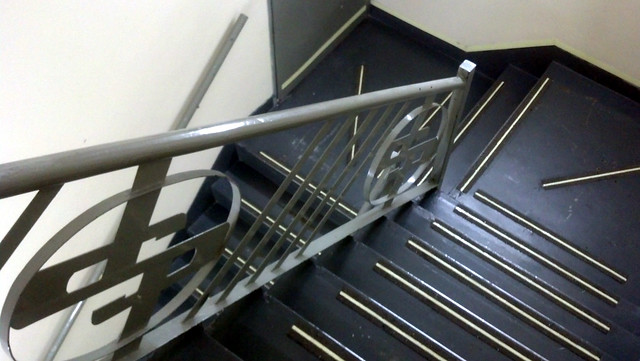 We chose to walk up them until we found this sign, which didn’t tell us more than that we were indeed on the right track. 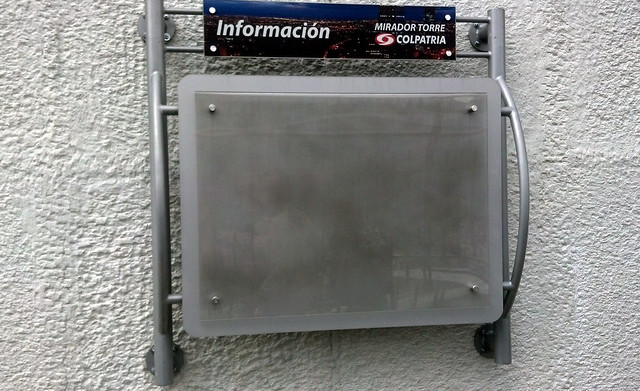 They can splurge for twenty security guards and a fancy electronic fingerprint scanner but not on an insert for this sign?

And at that point we finally found the observation deck! 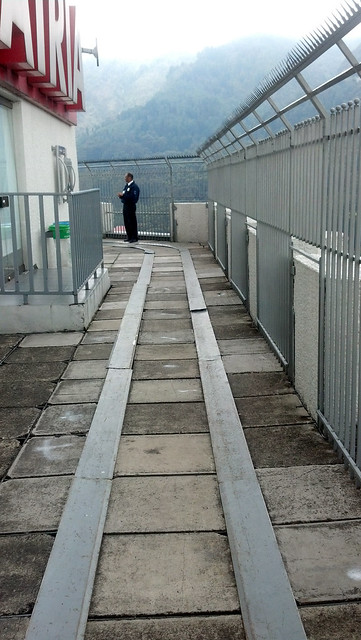 The whole deck was practically empty except for the three other tourists and a handful of security guards. Frankly, after all that hoopla, I don’t think the facility could handle much more tourism volume.

All the hoopla was very worth it though because the views were spectacular.

On one side we were able to look down on one of the city’s main streets, Carrera 7… 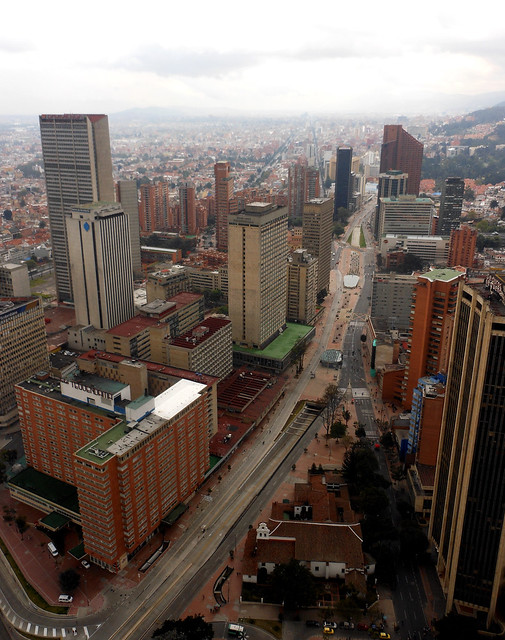 On another side we were able to see La Macarena, the old bullfighting ring… 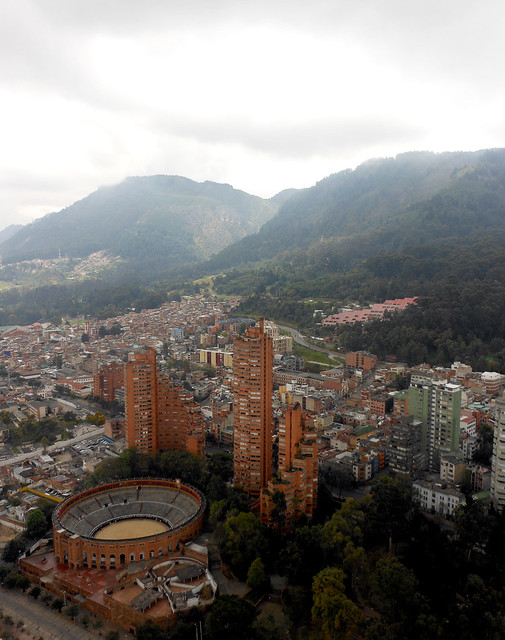 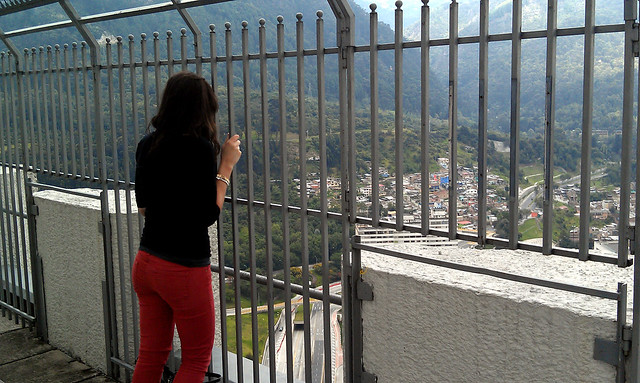 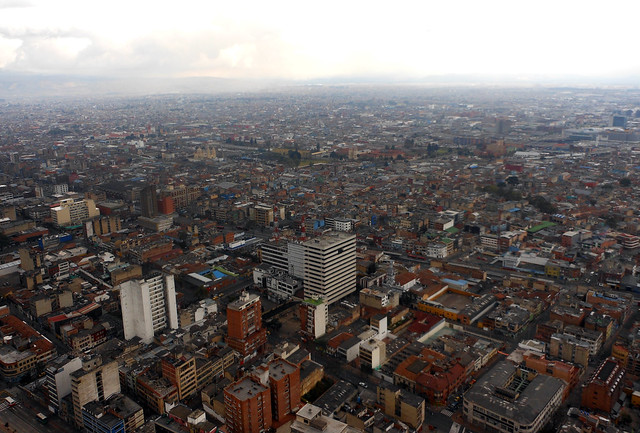 After we got our fill of the sweeping vistas we headed back down to the lobby via the same unmanned staircase and hallway that we’d previously encountered. At the elevator we hit the security wall again and as we retraced our steps back down to the exit we once again had to prove that we were indeed who we said we were. Luckily, nothing had changed with either our passports or our fingerprints within those 20 minutes and they allowed us to leave.

Once we were finally outside Andy started laughing and turned to me, pulling his small backpack off his back. He opened it up and pointed to something right on top.

“I had my knife with me the whole time!” He exclaimed. “All that security and what the hell were they looking for?!” 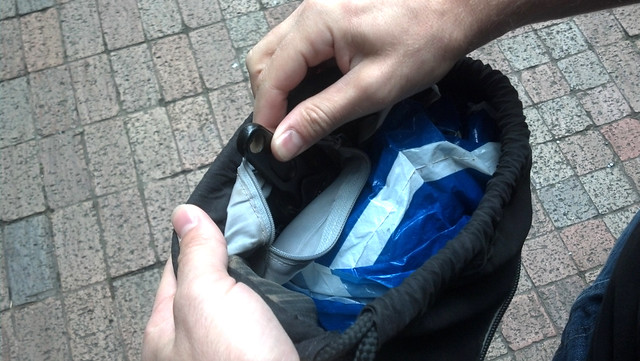 I have no idea.

We got a good laugh out of the whole ordeal. Despite seeming completely unnecessary, all the security personnel were quite friendly and the views were really amazing. The funny thing is, I’ve been to many buildings with high security before – I’ve done body scans, metal detectors, passport checks and had bags X-rayed everywhere from the Empire State Building to Burj Khalifa but this place seemed totally different. It was just so gratuitous, excessive and apparently inefficient – to the point where it was just downright comical. But I suppose what’s the point of traveling if you never get a good laugh out of the ridiculous things you encounter – and of course, at least for Andy, there’s always the thrill of accidentally sneaking a weapon past tons of security.

Anyway, should you find yourself in Bogotá and have a hankering to see some truly impressive views, here’s the sightseeing info:

When: The observation deck is open on the weekends and public holidays until 5 PM.
Where: Torre Colpatria, Carrera 7 #24-89. It’s the tallest building in the country, you can’t miss it.
Cost: 3,000 COP or about $1.55 USD per person.
Other good things to know: We went in the middle of a slightly rainy Sunday and there were only three people in front of us and it took a really long time. If there was much of a line, you might be in for quite a wait. This place was the polar opposite of efficient!

And here are a few more pictures… 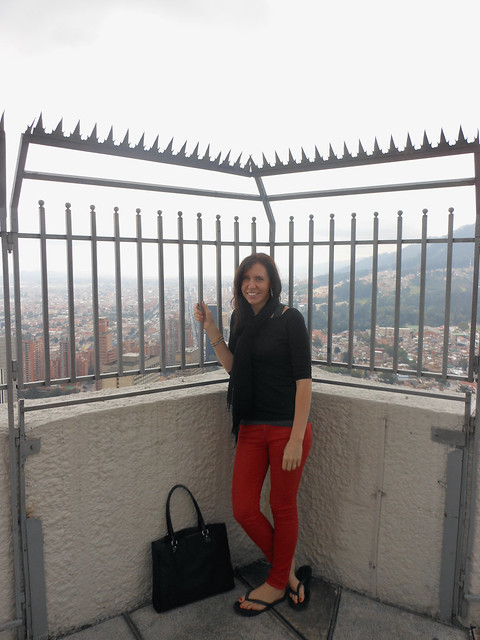 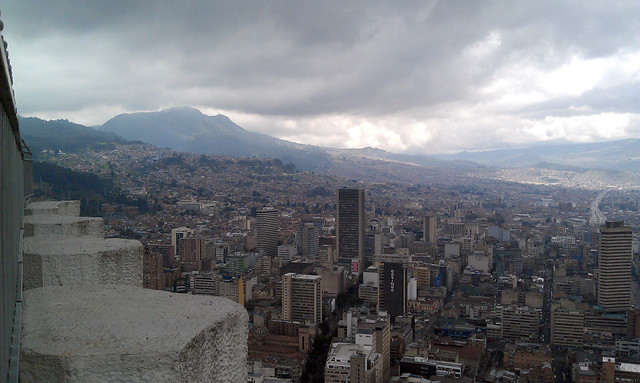