I once saw a street performing fire dancer in Nicaragua get burned. I want to say she was maybe European and she was probably just bumming around Central America as some sort of fire dancing apprentice of sorts. She was clearly in the process of learning the tricks of the trade: twirling batons, doing stunts, charming crowds, and she was trying to do it the safe way first, aka sans fire. But then, cheers from a devil-may care crowd interfered with her good reason and she lit her baton and burned her arm. You could see it had hurt a lot and you could also see she was unhappy with her reckless decision to heed the peer pressure of the crowd. 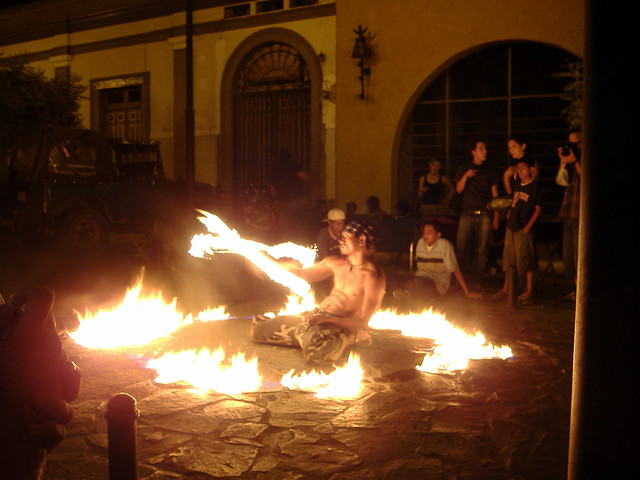 Obviously, this isn’t the girl. This was one of her more experienced friends who took over after her performance crashed and burned… literally. (Nicaragua circa 2008)

Street performers are usually pretty fun to watch – even ones whose skills don’t exactly measure up to their levels of enthusiasm. My only problem is that I can’t watch them without thinking of that girl in Nicaragua. The crowds will go wild (or just give a few claps) for high-riding unicyclists but I’ll be the one biting my nails picturing their soon-to-be cracked skull on the pavement. While other people cheer some knife-throwing nineteen year old, I anticipate severed arteries and SO MUCH BLOOD! 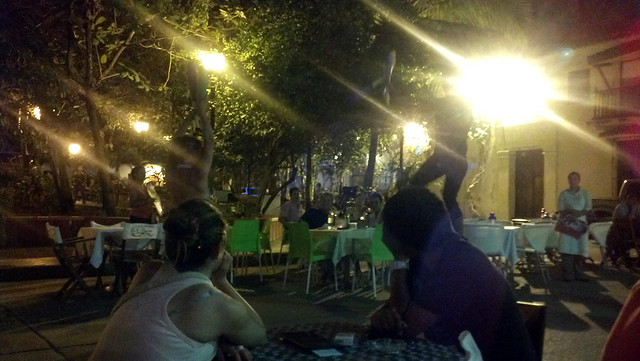 It’s kind of hard to see, but here’s a guy in Cartagena juggling and riding a unicycle… over pavement. (Colombia circa 2013)

Usually when we spot performers we can’t simply walk away to preserve my nerves. This is because I’m usually with Andy and you cannot tear that man away from anything involving music and movement… even when the performers lack talent. Even when there are other things to see and do. Even when it’s raining in Glasgow and disgusting pigeons are threatening his wife and the break dancers in question are ON A BREAK! Even then, we stay and watch.

You just never know how much experience someone has doing dangerous stunts. Maybe they’ve been breathing fire since they were six or maybe it’s their first time. And the venue – a street – hardly seems the safest place to do such dangerous things. 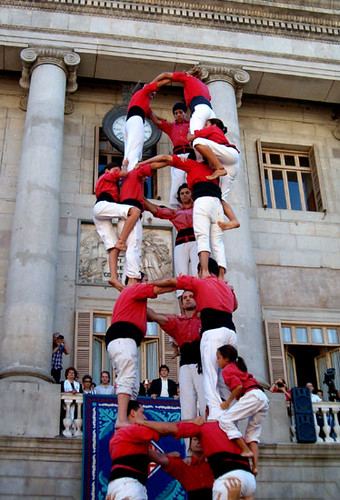 I even get stressed watching very well-rehearsed castellers like these in Barcelona who no doubt have been doing it for years. (c.c. image courtesy of UncleBucko on Flickr.)

I think some waiter in Nicaragua had offered the burned girl a glass of ice but sometimes nearby restaurants think of these people as nuisances and if one of them broke their arm or their head, they’d be hard pressed to find someone to take them to a hospital. 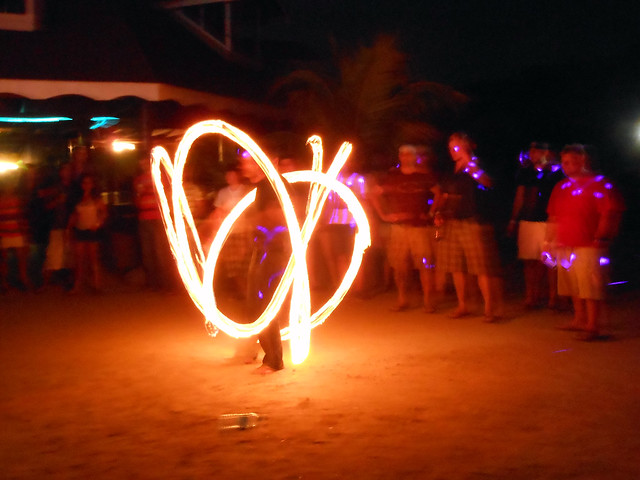 Or what about here, on the island of Utila. We were on an island for crying out loud… there was no hospital, maybe you could have found some doctor, but it was New Years Eve so finding a sober one might have been dicey. (Honduras circa 2012/2013)

I haven’t had many positive things to say about our recent experience at the resort in Jamaica but one thing I did enjoy was one of the evening performances. We were passing by the main stage and there was quite a crowd gathered, clapping along to some loud music – which, of course, immediately intrigued Andy. Also, there were seats, which immediately intrigued a pregnant me. On the stage was a man breathing fire. 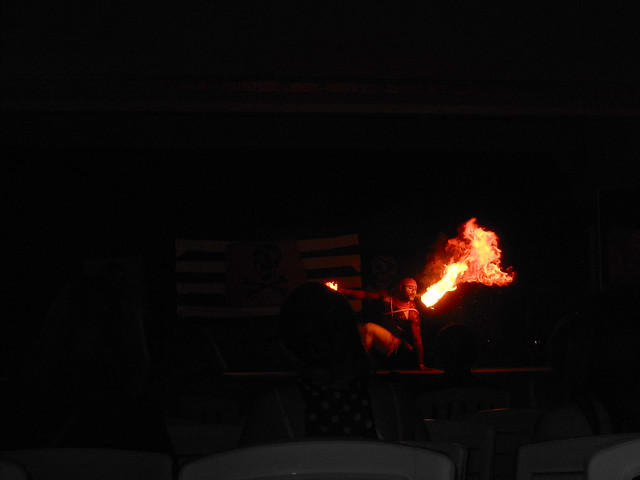 Other than the obvious theatrics, what I enjoyed most about the performance was the lack of worry I felt for this man. He was a pro. He’d been hired by the resort. He’d probably done this routine a million times – heck he might have even done it several times that day – and I was fully confident in his ability to breath fire without impending tragedy. Or, if tragedy did strike, I was fully confident that the resort had a vehicle on hand to take him to a hospital. It wasn’t the most exciting performance, I’ve seen performers with far less skill and grace tackle far more daring feats, but it certainly was pleasant to watch.

Maybe it’s some kind of irony or maybe I’m just a big ol’ hypocrite because here I am praising the watered-down fire dancing/breathing performance when all I’ve done so far is bemoan the watered-down-ness of the whole resort. Everything was enjoyable enough to be different but not different enough to scare anyone off – even the guy on stage breathing fire.

In the end, I guess it’s okay to have mixed reviews on a place; black and white views do tend to breed hypocrisy. Now I just know that I like different qualities when it comes to travel versus when it comes to street performers. I like my travel with a pinch of unpredictability and a dash of haphazardness – it doesn’t need to be all wrapped up in a pretty, all-inclusive bow. However, I prefer my street performers to be licensed, bonded and ready to appear on America’s Got Talent – or, at the very least, to be strong-willed enough as to not succumb peer-pressure and lite one’s batons before they’re good and ready!

I’ll leave you with a few photos of the “statue” street performers on La Rambla in Barcelona. 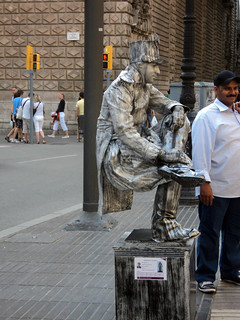 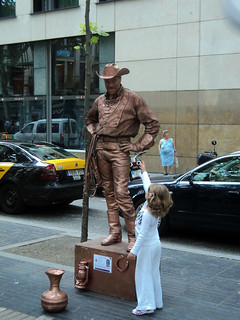 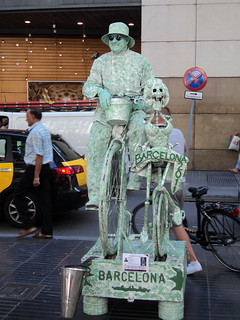 One response to “Foreign Findings: Shot nerves and street performers”