Sometimes life just doesn’t do happy mediums. I’ve spent the last few months bored out of my mind, physically unable to do very much because of my twin pregnancy. It’s like some kind of sick joke; here I am, unable to do much except twiddle my thumbs when in less than two months I will undoubtedly be busier and more exhausted than ever. If only I could trade some of that busy with some of this boredom and when the time comes, visa versa. But, time doesn’t work that way so here I sit, bored and stir crazy.

Earlier this week, in an effort to bring some excitement to my life, Andy and I went out to dinner. It was a rare occasion where at the end of the day I still felt like I had enough gusto in me to go sit at a restaurant booth and not keel over. Andy gets that I’ve been bored. He’s been very sweet and understanding and has tried to do everything in his power to make my life better. However, at some point, even sweet, understanding husbands must get tired of their wives having nothing more to talk about other than funny things the dog said that day. 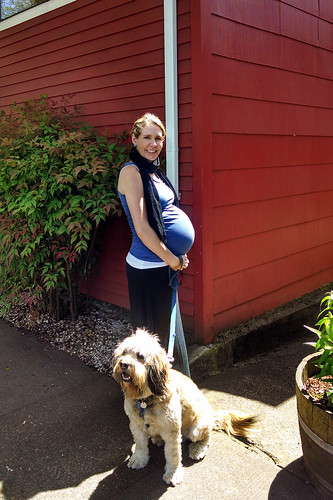 Don’t be fooled by his dopey face, this guy has some witty commentary. Also, here I am at 28 weeks with a little over two months to go.

Anyway, while we were out, our conversation shifted from my endless loop of babies, the dog’s hopes and dreams and the current state of my ankles to something a bit more fun – past travels. I’m not sure who initiated the switch in topics (probably Andy) but it was definitely the right call because reminiscing about old trips is always a good time.

It’s a few days later now, but since time is moving at a snail’s pace, I’m still thinking about that conversation which led me to a morning of reading through old blog posts and browsing through my Flickr photos. And, as it usually does, a morning spent doing that has inspired me to put up a new post. So in the spirit of nostalgia here’s a little look back at one of my favorite things about Guatapé, Colombia – the buildings.

It might sound a little dull, but believe me, the buildings were really special. All throughout the town, houses and businesses sported colorful artwork along their lower halves. The town is known for them and here are my five favorite things about them:

1. They made for beautiful pictures.

Truth be told, the town would have been really adorable even without them, but it was even more adorable with the colorful artwork. 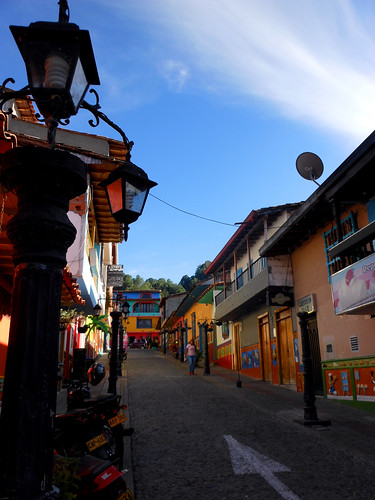 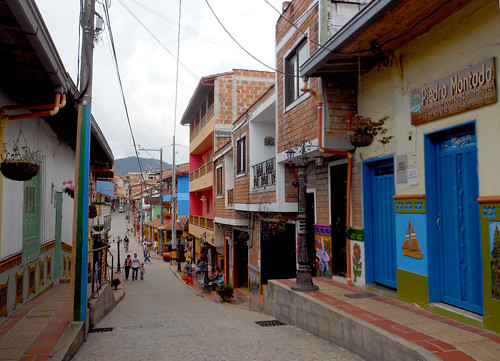 Fun fact: right after I snapped this photo, I ran into a massive spiderweb and did an embarrassing little dance. (Guatapé, Colombia circa 2013)

2. Lots of them indicated what that building was all about.

On our walk back to our hotel, we had to look for a particular hardware store to know which street to turn down. How did we know it was a hardware store? Because of the pictures of wrenches, hammers and other tools, of course. Unfortunately, I didn’t think to get a picture of that one, but here’s a different kind of store. 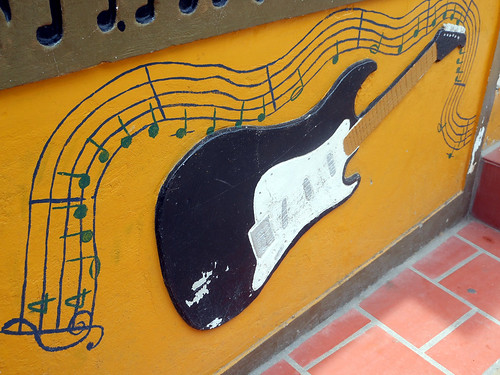 Looking for a particular business? No need to speak the language here, just look at the pictures… like at this music store. (Guatapé, Colombia circa 2013)

3. And sometimes they represented other things.

Like historic village life or other significant parts of the region. 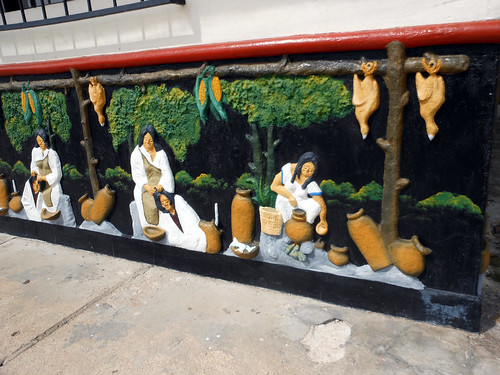 I’m not really sure what these ladies are doing, but my guess is that it’s something significant to Guatapé’s past. (Guatapé, Colombia circa 2013) 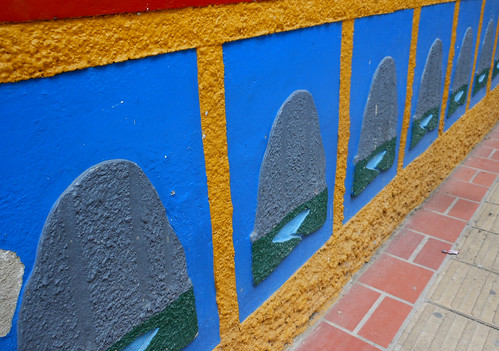 And here’s the region’s claim to fame – La Piedra, the massive monolith that looms over the town. (Guatapé, Colombia circa 2013)

4. And speaking of La Piedra… 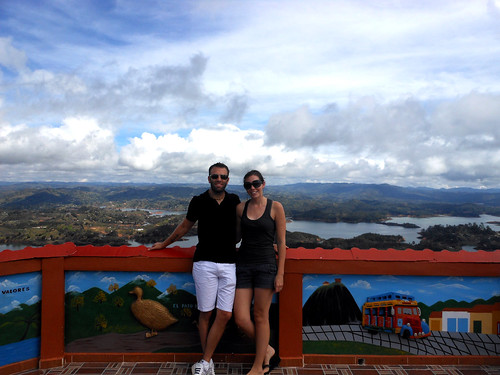 The artistic motif that covered the town could even be found at the top of the massive rock. (Read about our climb here!) (Guatapé, Colombia circa 2013) 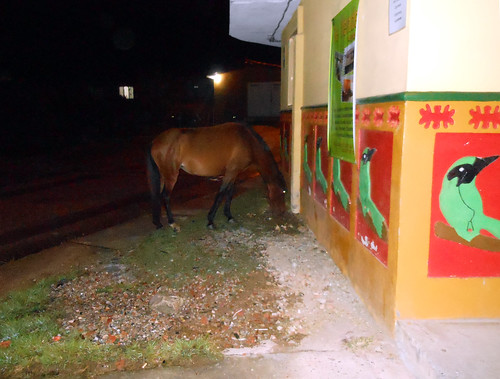 Because otherwise this would just be a picture of a horse enjoying a 1 AM snack on the side of the road… but add the colorful depiction of a bird and suddenly, BAM! something worth a photo! (Guatapé, Colombia circa 2013) 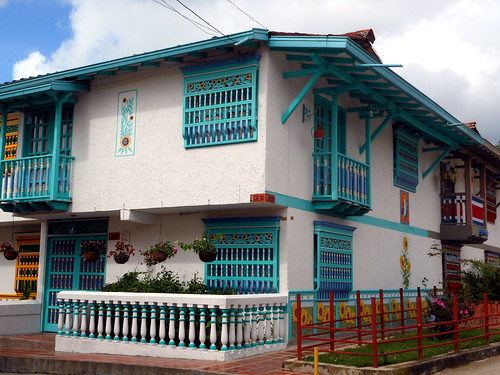 What’s this picture of? Oh, you know… just some random house. (Guatapé, Colombia circa 2013)

And for the one thing that wasn’t so great. 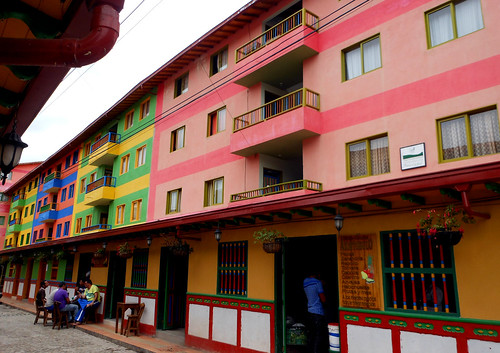 I suppose this building gets a pass though because it is pretty colorful and festive even with the offending blank white spaces along the bottom. Maybe it’s a work in progress? (Guatapé, Colombia circa 2013)

So there you have it, the beautiful buildings in Guatapé. Right now I’m typing this while propped up by about a million pillows while two little girls are dancing around in my belly. In the next room, the nursery is all set up – ready and waiting for these two little ones to make their debut. Overall, I shouldn’t complain, but it doesn’t hurt to have some cool things to look back on while you’re stuck waiting for the wonderful things in your future.

I’ll leave you with a few more pictures in case your day needs a colorful pick-me-up too.

Also, if you want to read more about Guatapé, check out these other posts. 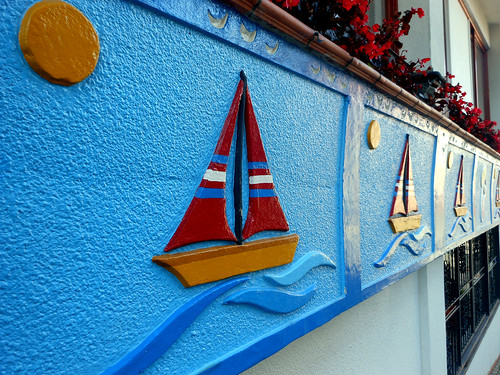 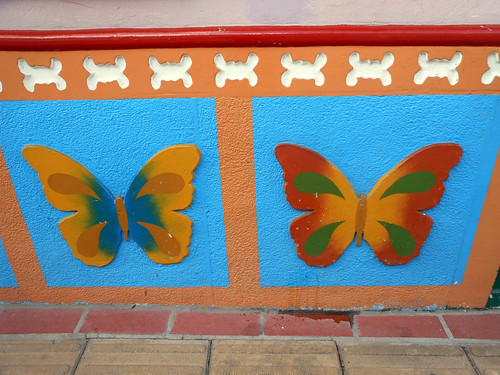 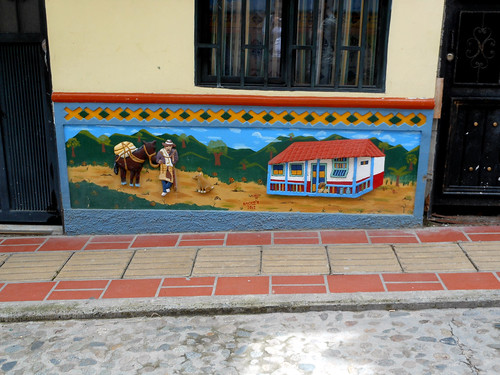 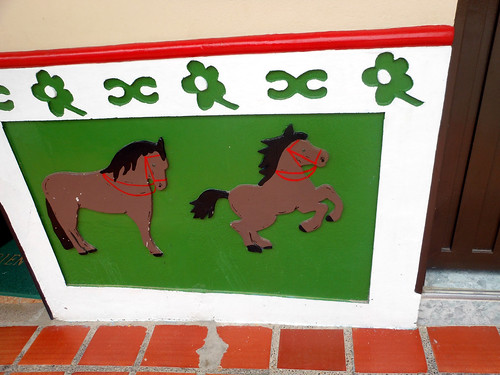 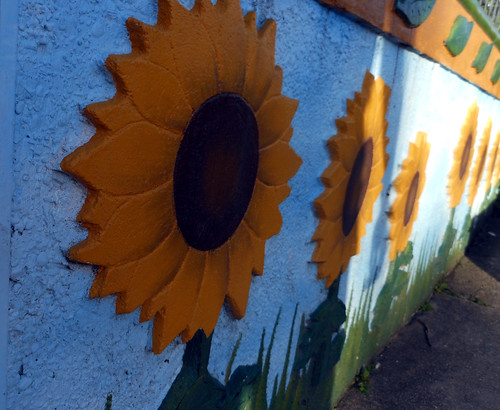 Is it just me or do these look like the lowest-maintenance flowers ever? Forgoing flower beds and just painting some pretty stems on the side of your house sounds like a whole lot less work.