Last month my mom came down with something – a bad case of the Can’t-See-It-Alls, better known as CSIA. Actually, it’s not better known as that, I just made the whole thing up. Don’t worry though, a quick Google search told me that it isn’t actually a common acronym for anything too serious. I doubt the Chimney Safety Institute of America will get all up in arms about me using their acronym this way.

But back to my mom… a few weeks ago she stopped by and she wasn’t here even ten minutes when I picked up on it. She had a pretty bad case, the poor thing. How could I get a diagnosis so quickly you ask? Because I’ve been there myself and the signs were everywhere.

Here’s a brief summary of her predicament:

Here are were some of her symptoms:

Anyone with a case of wanderlust, save for immortal time-travelers, can come down with CSIA. The good news is that, while it isn’t completely curable, it is manageable. So for all of you non-mad scientist vampires out there, here are the things that you should keep in mind if you start bumming over the fact that there is just so much world out there and you only get one lifetime.

Those are all great but I feel like you’re thinking you’ve heard them all before and that this post isn’t living up to its title. Sheesh… tough crowd. Okay then, here it is. Here is the best bit of travel planning wisdom out there, especially for those afflicted with CSIA.

You’ll never know if your trip could have been better.

Let that sink in.

Seriously, you will never, ever know.

It’s not like at the end of your trip you’ll get to compare notes with the you from an alternate universe who choose the Pacific coast instead of the Caribbean one. After my trip to Dubai I didn’t get a notice saying that I would have liked Abu Dhabi better. On my deathbed, my own life will flash before me, not the life of the girl who saw the Scotland lake district instead of spending more time in Edinburgh, or the life of the girl who picked a detour to Toulouse, France instead of a few more nights in Northern Spain.

The path not chosen might very well have been better but guess what? I’ll never know. Never. And that’s okay, because I can just assume I made the best call possible and get on with planning my next trip. That’s the thing about what might have been scenarios… they’re all hypothetical and you can do with them what you want. Mind blown, right?

Even if someday I go to Abu Dhabi, it wouldn’t be an accurate representation of what might have happened had I gone there last May. Why? Because the world doesn’t work that way; cities change, perspectives change, I change. You’ll just never know.

Right now my mom is in Peru. She’s a pretty fantastic traveler and I suspect by now she’s quite over her case of CSIA and having a wonderful time. She’ll explore Machu Picchu, check out the floating islands on Lake Titicaca and spend some time hanging out with Peruvian kids. In the end, I doubt she’ll even think about the things she didn’t get to check off her guidebook’s must-see list. Also, I’m going to try to convince her to write a guest post about her trip with lots of pictures. Hopefully she’ll take me up on that.

In the meantime, here is my very favorite trip planning image of all time. It’s an old Kate Spade ad and it makes me want to walk down to Powell’s and plan my next great adventure. 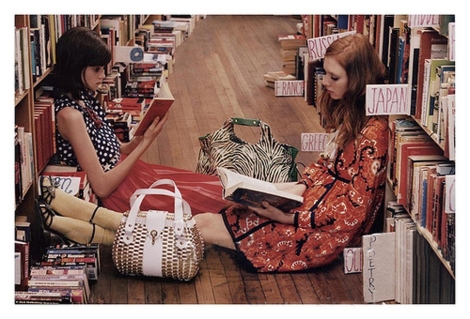 Isn’t it amazing. Doesn’t it make you want to go to a bookstore?