Last week, while Andy was packing up his luggage for an upcoming trip, I flipped on the TV to manage our DVR. Before I could make sure his favorite shows would be here awaiting his return, our attention shot to the screen where a very newscasterish voice was saying something along the lines of, “…and here you can see more footage of the meteors that have devastated Paris along with several other cities worldwide.”

Shocked, we watched in horror as meteors did indeed level the Eiffel Tower and we felt another wave of horror as we realized for the last few days we’d apparently been so engulfed in talking about how much we’ll miss each other that we had actually managed to miss something this big. A brief moment later, we sheepishly realized the show was actually a behind-the-scenes making of some movie.

Why yes, by ‘some movie’ I did mean one of the biggest blockbusters of the 90s. I swear though, the footage they were showing was not theater-worthy, it was more raw and believable.

The point of my story is that special effects these days are really, really realistic. And again, yes, by ‘these days’ I mean since the 90s. Disaster movies have realistic volcanoes/meteors/storms/etc. that flatten cities, action movies have car chases that end in gazillion-car pileups and I swear I’ve even had Pixar characters make me question what’s real and what’s not. But in truth, WALL-E and EVE’s love story is only real in our hearts and not that many gunfire-riddled car chases actually take place each day. However, if you were only getting your information from the movies and crime shows, you might think unknown serial killers with catchy monikers strike hourly in any given neighborhood and seeing gangsters firing rounds on crowded streets is the norm. They don’t and it isn’t.

My sister once had a foreign roommate here in Portland who, when she first arrived had so many preconceived notions about the dangerousness of our streets, would literally run back and forth between her apartment and her classes at PSU each day. Clearly, she had gotten the wrong idea from Hollywood. 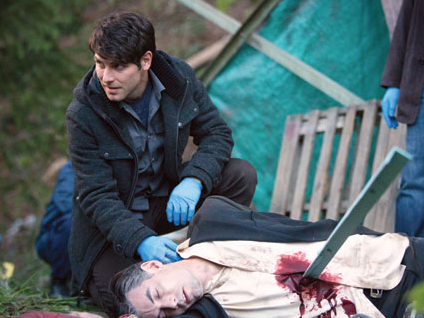 What TV shows make Portland out to be.

Preconceived notions make people think every woman in France is fashionable – not true, that beer will be affordable in Ireland because it’s a country known for its jovial drinking culture – not true and that every cop in America deals with grisly Law & Order-esque crime scenes every day – not true.

In my travels, I’ve discovered I know nothing.

Last spring when we went to Scotland, Northern Ireland and Ireland, my own preconceived notions led me to assume we’d return home with stories of bagpipes, Loch Ness monsters, Finn McCool and crazy nights drinking with leprechauns (not unlike the ones Chaos and I looked for here). Okay, not really, but I did assume we’d find lots of rain (nope), an ease of communication because we speak the same language (I do not believe the Scots we encountered shared the same language as us) and lots of cheap beer (nope).

As for Scotland, the number one thing we noticed during our stay wasn’t kitschy kilts or things covered in copious amounts of tartan (well, there was a lot of that). No, instead it was this: They really have a thing about fire safety. Who knew? No joke, this was the number one thing we noticed. Sure, I think learning to stop, drop and roll is as important as the next girl and we keep a fire extinguisher in a central spot in our condo, but those Scots take it to a whole new level.

Although thankfully we’ve never had reason to test it, our condo’s fire extinguisher does not shoot silly snakes. 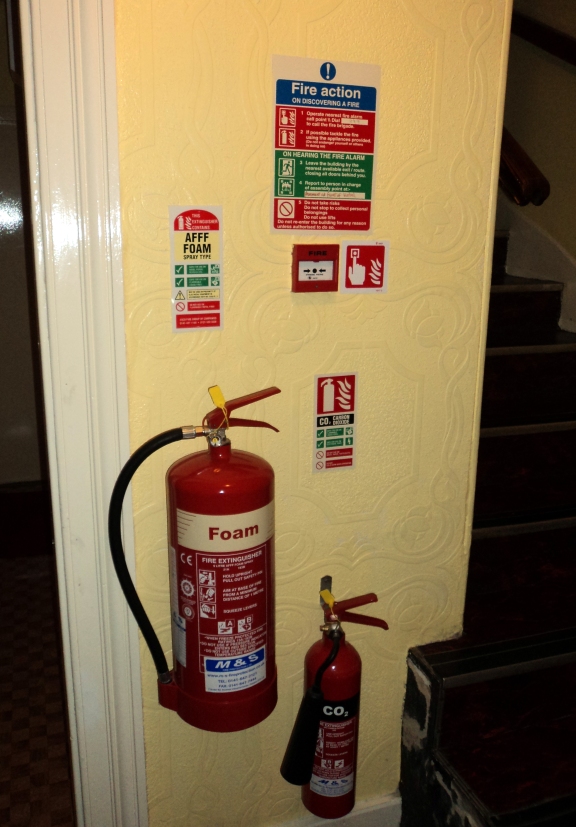 Every room had at least one wall that looked like this wherever we went.

I’m not kidding. This type of wall display was in the kitchen. It was in the bedroom. There were fire safety signs on all the doors, even in the bathroom. At first we thought it must just be the place where we were staying, but we would soon learn otherwise. This stuff is very important though. Which leads me to… 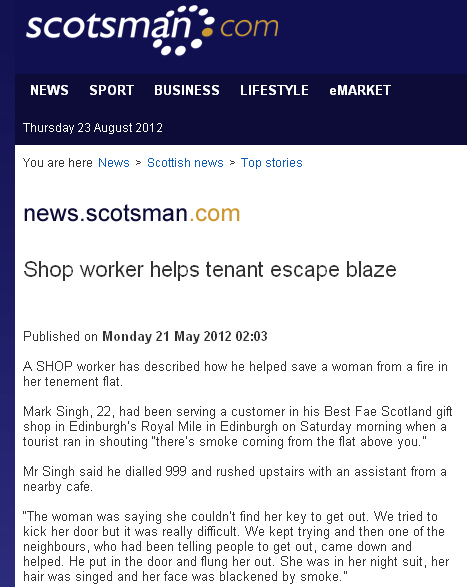 We were walking by when this fire was happening. I didn’t snap a photo because I keep forgetting to get photos of things I might want to blog about instead of things I want to put in the Shutterfly book. Still though, we were there.

Seriously, what are the chances? Andy and I had been joking for our entire three days in Edinburgh about the absurd number of fire safety warnings and equipment and then, out of nowhere, on our way back from a hike around Arthur’s seat, a building was ablaze. We thought surely, this must just be an Edinburgh thing, that is until we took a quick train to Glasgow. Which leads me to…

In addition to our bed and breakfast having the same type of fire safety stuff as we found in Edinburgh, Glasgow also had these fire assembly point signs, which were everywhere. This was a good thing, because when we were out and about on our Glasgow self-guided architecture tour (yeah, I’m a nerd) we stumbled upon…

Sure, a cigarette lighting trash on fire is hardly something to write home about (or write a blog post about), but still… I’m sure I saw a sign warning against that somewhere. This fire further baffled Andy and I and made us wonder what we might find on our next Scottish stop. Which leads me to…

In Ayr we found a beautiful beach, a great golf course and of course, more fire safety. The above photo was taken at our hotel. This particular hotel had a bar downstairs where we enjoyed a few beers that night. Sitting next to us at the bar we found…

Just kidding… but read on.

Actually, it wasn’t this guy. This is a fireman statue in Glasgow. We did however find a different Scottish guy who, like us, was a guest at the hotel. He traveled for his work. When we inquired as what kind of work that might be he told us he travels around educating people about fire safety. Andy and I couldn’t contain our burst of laughter and our faces of disbelief. We tried to voice our confusion over the bombardment of fire safety paraphernalia but failed to make him understand our point of view. He was confused as to why we found the whole thing so amusing. “Fire safety,” he said, “is very important.”

And I suppose it is – especially in a country that is apparently very flammable.

So we, once again, learned a travel lesson about not knowing what to expect. This time, it didn’t really affect our trip except to make us laugh, but sometimes, preconceived notions can take a toll on your overall experience more than you’d think. You might find yourself hating a place because it doesn’t live up to your unrealistic expectations. Or, on the other hand, you might find yourself happily discovering that it isn’t necessary to show up to class scared, sweaty and winded each day because you’ve realized that the streets of Portland aren’t as dangerous as they seem on TV.