Last night Andy and I walked the dog down to the Alder Street food cart pod. After much debate, Andy got Korean, I choose Thai and then we headed over to Director Park to enjoy our dinners by the fountain. If Portland is charming in it’s natural state (drizzle with intermittent showers) then it’s downright glorious on a warm summer night. That’s the
thing about weather – it can really make or break something. 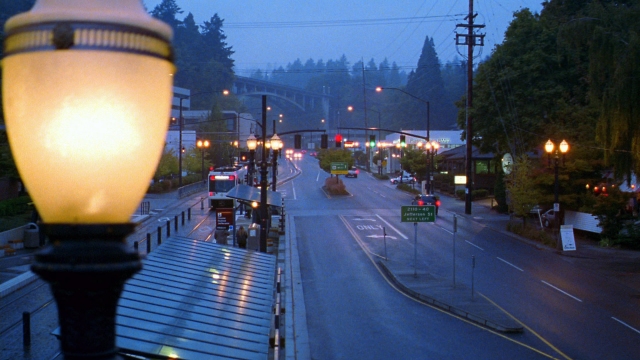 Lovely Portland in the rain. This is my neighborhood, Goose Hollow, in downtown Portland.

When Audrey Hepburn’s character in Sabrina is schooling Humphrey Bogart’s character on how to experience Paris for the first time, she insists he have rain the first day. “…Never an umbrella in Paris, and under all circumstances rain the very first day.” This might be fine for the city of love, but on most of my trips, I would recommend sunshine.

On our trip to Northern Ireland in May we drove along the Antrim Coast. Should you too happen to find yourself embarking on this scenic stretch of coastal road here is my #1 tip for you: get yourself some sun. That’s what we did and it was pretty amazing. Historically, the weather in May has lows of 42˚ and highs of 57˚ F. On this day, it was 77˚ and the stores ran out of sunscreen (or sun cream as they called it).

Here’s the route we took and here’s what we saw.

From A to Z (or rather, just to F, the country really isn’t all that big.) 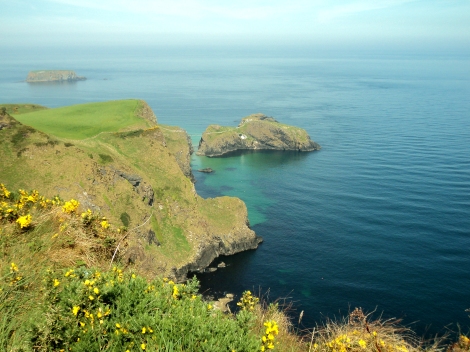 Then where we jumped over the fence and instead of using it as some sort of safety indicator, we used it as a tri-pod for a self-timed shot. 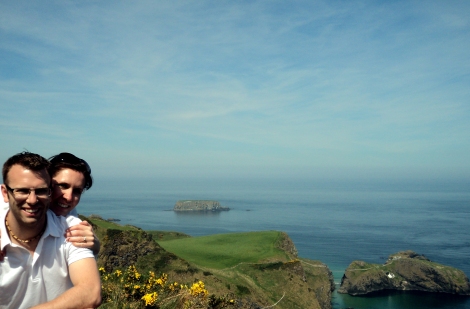 Now it’s a postcard with our faces!

Me on the bridge.

The original bridge was erected by fisherman so they could easily check their salmon nets.  Now, the bridge is rebuilt periodically and is mostly used by tourists like us.

Andy on the bridge.

In all honesty, I was expecting a little more risk involved in crossing this bridge. Perhaps, my expectations were indicative of the fact that I’ve spent a disproportionate amount of travel time in developing countries that tend to have more lax safety regulations. The U.K. however, is fully developed and much stricter with things like safety standards. This is good for obvious reasons but bad for adrenaline-pumping adventure.

Hard to beat that view though (and yes, I’m talking about my handsome husband.) 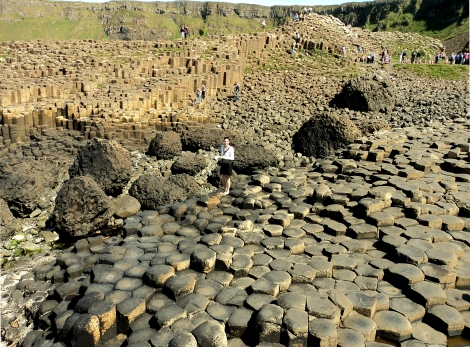 The ice cream is long gone by this point. I had a cone and it was still quite possible to eat it all before it melted. Nary a napkin needed.

So why are these rocks shaped this way? Let me tell you. As legend has it, Irish warrior giant, Finn McCool was gearing up to fight Benandonner, a pretty bad-ass Scottish giant, when he spotted the sizable Scot on the horizon. Realizing Benandonner was much bigger than himself, he had his wife disguise him as a baby, thus tricking the intruder into thinking the father of the baby must be enormous. When he fled back to Scotland, he tore up the causeway behind him to prevent any potential pursuit. On a side note: scientists have come up with an alternate explanation involving the heating and cooling of volcanic rock. Sounds like hogwash to me.

We saw no giants.

My husband and I are on the rocks… quite literally.

All in all, it was a fantastic day. Had it been raining, we still would have had fun. Someday I’ll tell you about my adventures involving a downpour, a castle, underground tunnels with ceiling so low we had to crawl, and flooded exits. (Edit: I did, it’s here.) For this trip though, on this day, we were thankful for the sun. So if you are visiting the Antrim Coast, get yourself some.

If Audrey Hepburn can control such things like rain in Paris, we should be able to control weather too. After all, that movie is from 1954, surely with all the technology available to us in this day and age, we could get a little sunshine when we want it.

“This is what you do on your very first day in Paris. You get yourself, not a drizzle, but some honest-to-goodness rain, and you find yourself someone really nice and drive her through de Boulognein a taxi. The rain’s very important. That’s when Paris smells its sweetest. – It’s the damp chestnut trees.” – Audrey Hepburn in Sabrina. 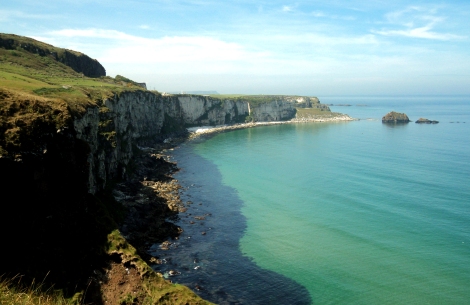 Somewhere along the Antrim Coast.