Last year, one of my favorite travel bloggers, The Everywhereist, wrote about a trip she’d taken to Portland. While setting up her post about the mouthwatering culinary scene, she mentioned that Portland differs from other cities in that it doesn’t have a landmark sight. I love my city, but I have to agree with her. No Golden Gate Bridge, no Space Needle, not even a huge ball of twine or rubber bands or whatever else Midwestern towns have.

Who says our sign isn’t as iconic as the Hollywood one?

Every summer when the tourists come flocking to town with their cameras, maps and pants that unzip at the knee to become shorts, I always wonder – why are they here? Of course, being in love with my city and all, I want the world to come sample her food, ride her streetcar and experience her drizzle.

Still, one doesn’t garner as many travel bragging rights after a stint in Portland when compared to other places. Riding our aerial tram is cool but it doesn’t compare to seeing the Big Apple from atop the Empire State Building and I just can’t imagine a conversation that goes, “Oh, you’ve been to Bourbon Street, well I’ve been to NW 23rd Ave. in Portland and that is way better.”

Come to Portland and see the drizzle, rain and showers!

I’ve set out to change all that. After all, I’m a travel writer, and if I can’t find anything to write about in my own city, then I have bigger problems than not understanding why someone can’t commit to either pants or shorts when getting dressed in the morning.

Last week, motivated by sunny skies and a dog who needed a walk, I set out to see some of my city through the eyes of a tourist. I was looking for something iconic and awe-inspiring. Naturally, with that type of criteria, I made my way to the world’s smallest park and the home to the “only leprechaun colony west of Ireland.” This may sound far fetched, but according to multiple articles in The Oregon Journal, this is indeed fact. Of course, only one man has seen them. And he’s dead. And that newspaper is defunct. But either way, this is the story of Mill Ends Park. 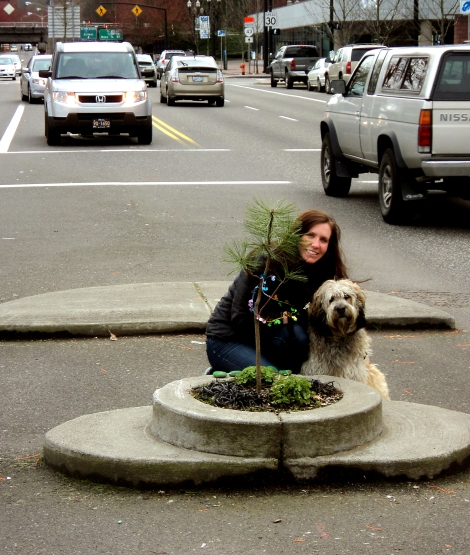 Not a lot of room to run and play.

The year was 1946 and Dick Fagan, a journalist working for the Oregon Journal, spent way too much time staring out his window. Down below on the busy street was a hole where a light post once stood and this blight in the median bugged the crap out of him. Finally, he decided, if something needs done, he’d better do it himself so he filled the hole with dirt, planted some flowers and proclaimed it to be the world’s smallest park. As chance would have it, soon after its creation, Leprechauns settled the new land. For years, these little green Irishmen and women were featured in Fagan’s newspaper columns – for me, this is where I start to question his journalist credibility. The little plot officially became a real city park on St. Patrick’s Day in 1976 and the novelty of such a small park has since sparked all sorts of frivolity.

There have been parties with bagpipes, swimming pools for butterflies and my personal favorite, a tiny Ferris wheel delivered to the pint-sized park by a full-sized crane. I tried to find a picture but apparently the feat was so awesome, no one could be bothered to pull out their camera lest they miss a moment of the awesomeness. Seriously though, either the Portland Parks and Rec page is lying to me or Google image search has really let me down.

It hasn’t all been good times for the park though. The petite park has had its share of hardship as evident in this photo below submitted to Fox 12 by a viewer after a storm.

According to Fox 12’s Chief Meteorologist Mark Nelsen, even Wikipedia was up to date on the happenings. He reported that the site said: “On Friday, February 2nd, 2012, a terrible storm with winds gusting in excess of 20 miles per hour devastated the park, leveling every tree inside the park’s boundaries, resulting in the largest “blowdown” of timber in the park’s history. Thankfully, no one was injured.” That part of the entry has since been deleted, I checked.

So that’s the back story of the park and what follows is my official traveler review from my visit to this historic yet whimsical Portland landmark.

On the day of my visit, Mill Ends Park was still decked out from the previous week’s St. Patrick’s Day revelries. We did not, however, spot any leprechauns. I blame this on the fact that my travel companion tried to lift his leg and flood their village. Side note: Mill Ends Park isn’t really much of a dog park.

This sight is a definite must-see, particularly if you’re crossing Naito Parkway at the SW Taylor Street crosswalk. I would recommend giving yourself about six seconds if you plan on walking around the whole park but if you’re short on time, you could probably see most of it in three. You might need another minute or two if you plan on reading the nearby plaque.

The park has no amenities to speak of but a public restroom is located approximately 15 feet away at Waterfront Park. Also, a definite draw for any budding photographer is that the park provides a chance to practice aerial photography without the added expense of renting a helicopter. Overall, the park’s atmosphere was charming but traffic from the nearby parkway was a bit distracting.

Aerial shot and no helicopter needed!

There you have it – my first actual review of an actual sight on my blog.

If you should find yourself in Portland, you now have something to go and see. Incidentally, this last week was spring break and I helped no fewer than four groups of people with touristy things like where to find the nearest food cart pod. The tourists have arrived. To see what, I’m not sure. Perhaps I should tell them about Mill Ends Park.

In the end, I may not have found Portland’s answer to the Eiffel Tower but I found a part of my city that makes me laugh, which is always a good find no matter where your travels take you. My blogger idol may have the Space Needle up in Seattle, but we have Mill Ends Park and that, my friends, is in the Guinness Book of World Records.