Before heading to Lisbon a few years back I remember flipping through some guidebook and reading that in recent years, the city’s once-hopping nightlife had been significantly scaled back. Well, I’m not exactly sure how crazy Lisbon used to be, but when we went back in 2011, it still seemed to have some hop left in it.

Andy and I were traveling with some good friends of ours and instead of a hotel, we’d opted to get a little apartment for our three-day stay in Portugal’s capital city. I’d done my research and the Bairro Alto district seemed to fit the bill for what we wanted: central, historic and with plenty of restaurants, bars and shops. Also it was adorable.

Yeah, it was that cute. Now that I think about it, this photo might actually be from a nearby neighborhood… still, the whole area was this cute.

We arrived mid-morning and fought the good fight against jet lag. We settled into our adorable attic apartment, did a little grocery shopping, prepped a batch of white lighting sangria and walked around and saw a few nearby sights. Then, in the late afternoon, one of us finally voiced out loud what we’d all been thinking, “We should take a quick nap.”

Could our mid-day wine boxes have been to blame for our sleepiness? Perhaps. But seriously, when you see wine boxes the size of juice boxes in the supermarket, who says no to that?

We all agreed, of course, that the nap would be one of the cat variety.

“We can’t sleep too long because we have to adjust to the local time!” We agreed.

“We’ll all make sure to wake each other up!” We promised.

So we set our alarms and climbed into bed. Feeling optimistic that the day wasn’t really over yet, I’m pretty certain that neither my friend Courtney or I even washed the stale makeup off or our faces. As it turns out, we should have… because it was.

Each of us individually and sheepishly silenced our judgmental alarms and prayed that no one else would have more not sleep through the first day of our vacation determination than the ourselves. No one did.

And of course, as you might have guessed, while we might have slept through the rest of the day, we still all woke up eons before daylight. One by one we all tiptoed out into the living room to see what was up. Our apartment had three small bedrooms, one with a balcony. Since there were just two couples, we’d opted to leave that one unoccupied so that we could all equally enjoy the balcony. On that balcony, in the middle of the night, was where we discovered Lisbon’s nightlife.

See our little heads up there against the clouds? It may look like we’re sitting on the roof but in reality, there’s a little balcony up there.

While we’d been sleeping, the quaint little streets below had morphed into a raging party. Who knew?

1. It was a total surprise.

The fact that we booked a place directly over the most happening street in the whole Bairro Alto district was a total surprise to us. Luckily, the fact that our apartment was so high up off the street meant despite our prime location, the noise was shockingly minimal. We may have missed the action the first night because of our too-long nap, but don’t you worry, we didn’t miss it the next night. 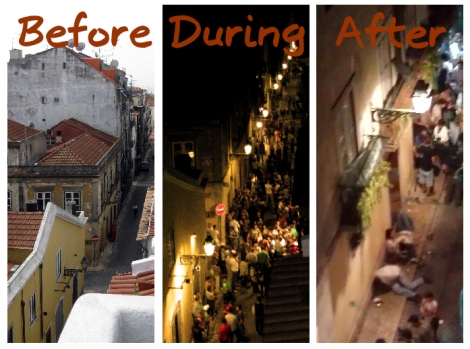 The view from our balcony: before, during and after the night’s excitement.

2. We’d stumbled upon the Las Vegas of Europe.

On our nights out we not only met Portuguese partiers but also weekend revelers from Spain, France, England and all over Europe. There were countless stag (bachelor) parties, hen (bachelorette) parties and birthday celebrations complete with themes, costumes and props. The theatrics were hilarious.

Some French guys celebrating a stag party sporting mullet wigs and tacky track suits in an attempt to make fun of the Portuguese hairstyles and dress. On my entire trip I do not remember one Portuguese guy with a mullet or a track suit. Leave it to the French, right?

3. A drink in the street means more money in your pockets.

In Lisbon, drinking is allowed in the streets. For most people this means you can buy a drink and take it into the street. However, if your apartment happens to be on that street, it means you can turn your nose up at €9 watered-down cocktails and instead enjoy home-made sangria from right upstairs. Win!

Andy dishing up some yummy sangria.

4. No more waiting in long lines for bathrooms!

Yes, these stairs… all the way up to the attic.

And then through this little doorway…

To get to our little apartment with our own private bathroom.

Because that’s what nightlife is supposed to be.

And for the one thing that wasn’t great…

This one doesn’t really apply to us but it sure did apply to city workers and proprietors of nearby establishments. When drinking is allowed on the streets there’s no one to tell overzealous partiers that enough is enough. People partied hard; people threw up; people got in fights; people peed.

I’m happy to report that no one in our traveling foursome threw up, got into a fight or urinated in public. And that, my friends, is the key to enjoying the nightlife in Lisbon – that and, of course, happening upon the cutest little apartment right on top of all the action.