I’m not one to book excursions ahead of time. Partly because I’m not that organized and partly because lots of places use PayPal and PayPal has banned me until I somehow prove I’m not sketchy… which I don’t know how to do. The ban is because back in 2011, I was attempting to snag last minute spots for a scuba diving course in Honduras for the next week. The problem was that I was in Germany at the time, trying to use an American PayPal account that I hadn’t used since, I don’t know, high school, attempting to give money to a company in Honduras. Also, communication is not my strong suit. While in the end the booking went through, PayPal viewed it as an unforgivable demonstration of sketchiness and they periodically send me emails reminding of that. 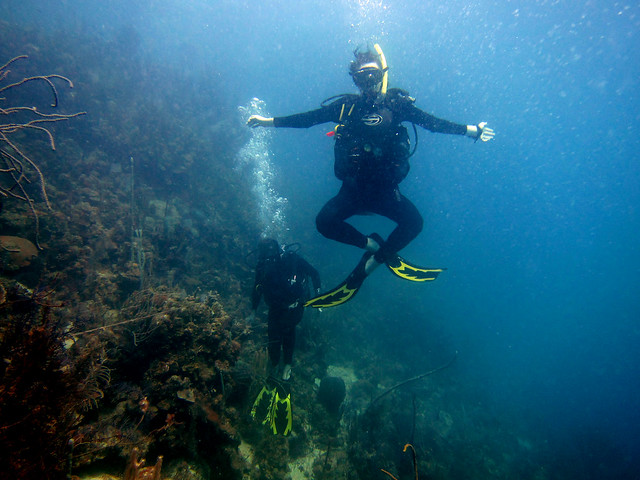 Seeing as how our instructor lost us once and I ran out of air twice, I’m thinking the scuba school was way sketchier than I ever was. Read about that here and here. (Honduras circa 2011)

In all my years of travel, that was my only time booking an excursion in advance. That is, until our trip to Dubai last spring. This particular website took credit cards instead of just PayPal and the excursion looked fun so I gave it a whirl. The thing about booking from a website instead of a local coordinator is that you don’t get a real feel for what the experience will be like.

So what was the excursion? An overnight desert safari. Because that totally sounds like something tourists might do. Right?

But I’ll get to that in a minute. First things first… The excursion sounded fun, perhaps a bit kitschy, but fun nonetheless. And frankly, a lot of Dubai is a bit kitschy, it’s just part of its shtick. The tour promised good stuff like transport to and from our hotel, a delicious BBQ dinner, camel rides, performers and we’d get to spend the night out in the desert in a Bedouin camp.

So I booked it and they accepted my credit card (take that loss of business, PayPal!) and we were excited. 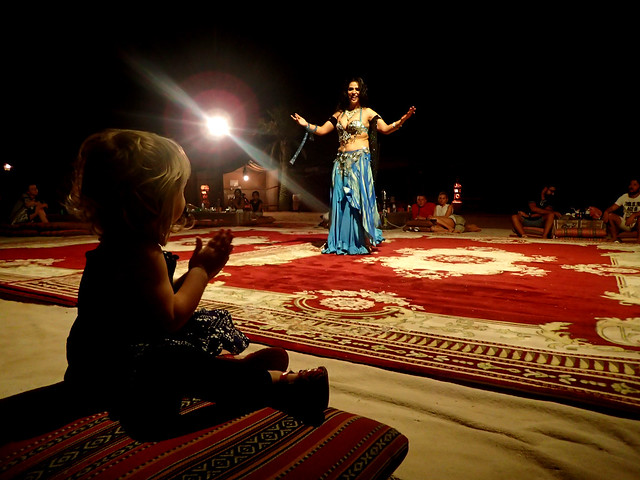 I’ll have more posts about the performances and other stuff another day. I promise.

The first part of the day went largely as expected – we got to the camp, rode a camel, watched a few performances and ate a good meal. It was a fairly organized production and there were probably about 30 tourists taking part in the whole thing. The fact that we seemed to be rushing everything when we quite literally had the whole night struck me as a little odd, but who am I to tell the tour company how to run their excursions. Then, the reason for the haste suddenly made sense.

As the evening winded down, someone made the announcement to return to the vehicles. Everyone started gathering their things so we did too, thinking we’d been wrong in our assumption that this location was where we’d be sleeping. Then, the announcement man came to our table and told us we didn’t need to gather our stuff, we would be sleeping here. Also, and this was the kicker, we were, in fact, the only ones staying the night.

Suddenly, the hurried dinner and shows made sense – people needed to get back to the city. Suddenly, I realized that we were the only ones with bags larger than a purse. Suddenly everyone else was gone. 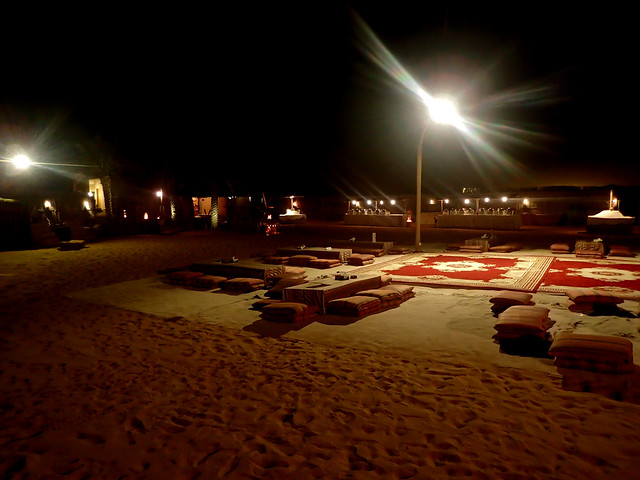 Just us, in the middle of the desert. At least they kept the electricity on… I mean, they wouldn’t kill the generator on us? Would they?

This is when the highly organized portion of the excursion ended and everyone seemed to just start winging it. And by everyone, I mean the one guy who drew the short straw and had to remain overnight with the wacky American family while everyone else went home.

First, he wanted to know where we wanted to sleep. We opted for underneath the open air tent and so he pushed a bunch of low tables together, topped them with some mattresses and piled on the sleeping bags. One big bed for one big family. 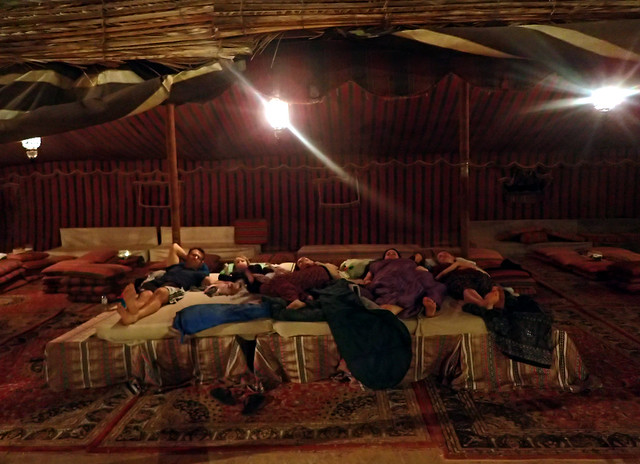 Then he brought out some water bottles and sort of disappeared and we were left to our own devices.

Baffled by the whole situation, we slowly got ready for bed while kicking ourselves for not having researched dangerous desert critters before we found ourselves without WiFi in the middle of the desert. Then, after a bit, the hum of the generator died and with it, the lights of the camp. A few torches stuck in the sand were all we had left for illumination and a quick exploratory trip to the restroom revealed a few tea lights on the counter that would no doubt burn out with an hour or two. Oh, and a few very large moths that staked claim on the sink as their personal desert oasis.

“Everyone, put down those water bottles! We’re going for dehydration, people!” 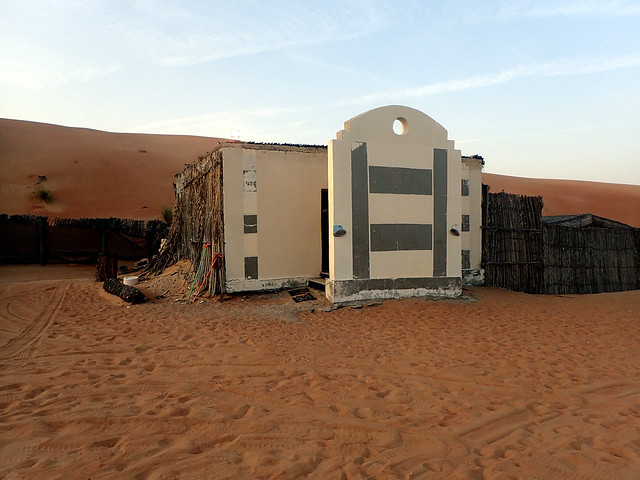 Here’s a picture of the bathrooms that I took the next morning. They really weren’t that bad… except for the darkness and the moths.

As we all attempted to fall asleep, the only evidence that someone had indeed remained on site with us was the occasional sound of a cell phone receiving messages. I have no doubt they were texts from the poor guy’s curious friends and family wondering what sort of folks finally opted in on the part of the excursion that, while technically offered, was never really executed.

Then, at some point, we all fell asleep. And, as always with camping, morning came really, really early. Not knowing quite what else to do when the sun woke us up, we hiked up a nearby dune just outside the camp to catch the sunrise. 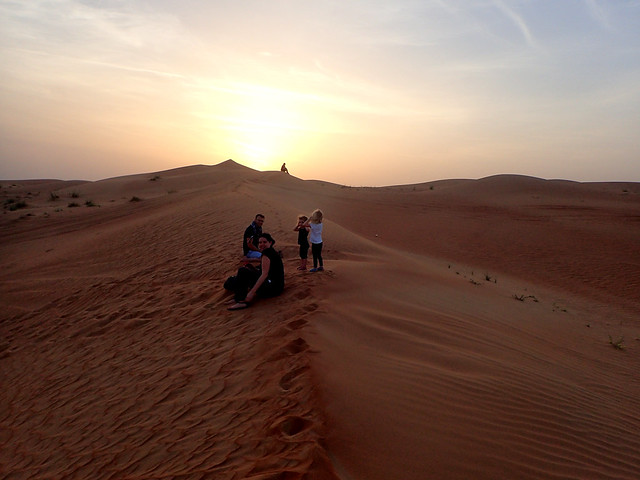 It was really pretty and it was already getting hot.

For perspective, here is a picture my mom took of the rest of us and the camp down below. 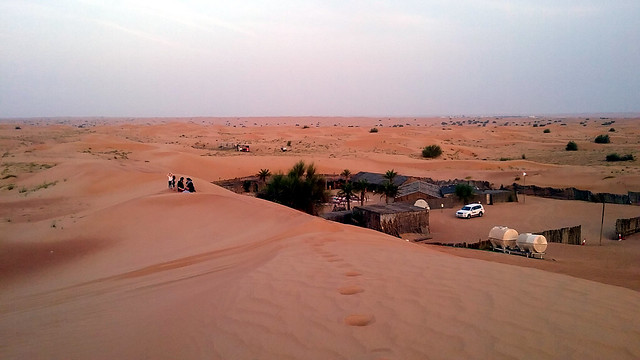 See? There was one vehicle left. We weren’t completely alone.

After the sun was up, someone showed up with an absurd amount of groceries. As we watched him and the guy with all the texts from the night before set out two dozen hard boiled eggs, two massive stacks of bread and a huge assortment of beverages and fruit we speculated that perhaps there was a desert sunrise tour that would be joining us at any minute. Not so. It was still just us.

So we ate. This seemed like another part of the excursion that they were just winging.

Guy #1: So we actually have people who want to sleep here!? What do we serve them for breakfast?

Guy #2: I don’t know. Just pick up some groceries.

Guy #2: I don’t know. They’re American so maybe some white bread? I’ve heard they like that. And probably buy a lot because I’ve heard Americans eat like camels. 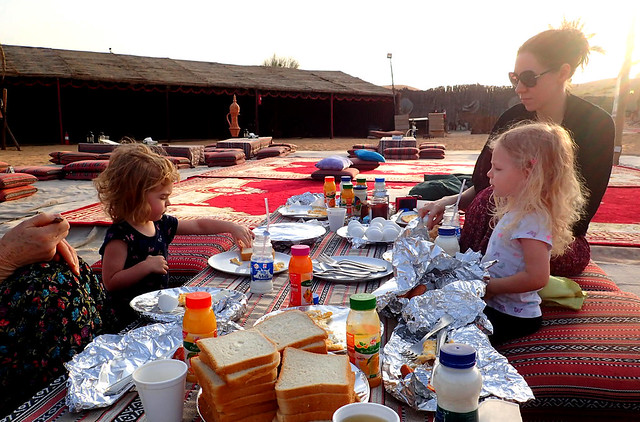 See all that bread? There were two plates like that. There were six of us. That would have been at least eight pieces of bread each, plus four eggs each, plus a bunch more. 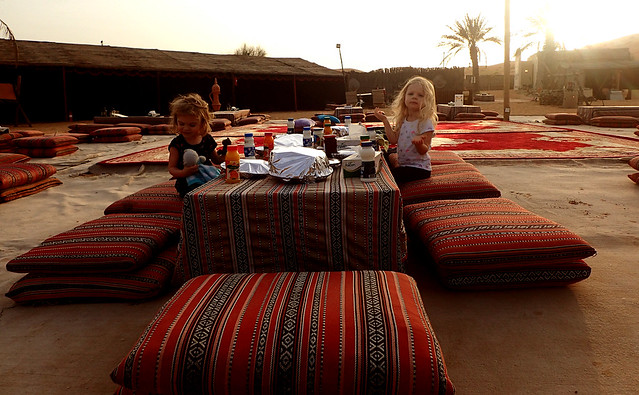 “No way girls, you can’t leave the table until you’ve cleaned your plates. One more loaf of bread each! And finish that camel’s milk!”

After breakfast Andy chit chatted with the two men.

Andy: So do many people do this tour?

Andy: Yeah, but do many people do the overnight part?

And so it was settled. As much as this seemed like something tourists going to Dubai would eat right up – the chance to spend the night under the Arabian sky, marveling at the stars, miles from the city in an constructed-purely-for-tourists Bedouin Camp – it’s apparently not really a thing. Well, except for us, that is.

I’ll have another post on the activities and tell you about how one of my kids is pretty sure she is going to be a Whirling Dervish when she grows up. But for now, I’ll leave you with a few more pictures from our overnight and morning. 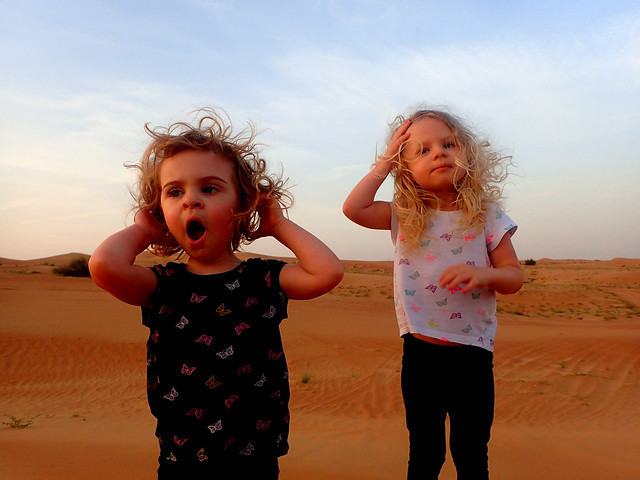 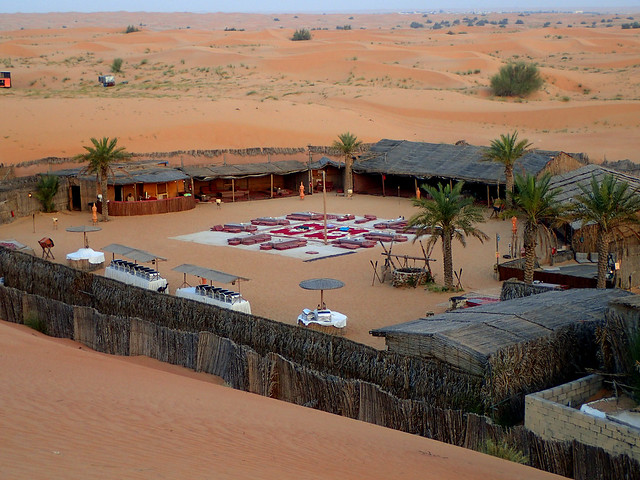 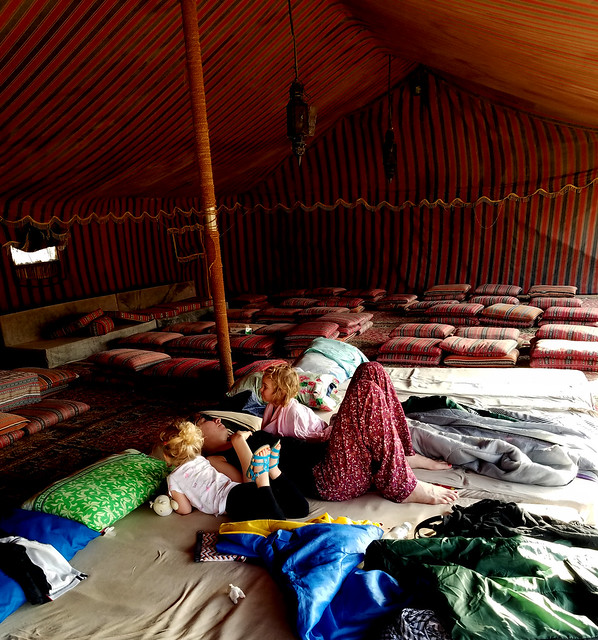 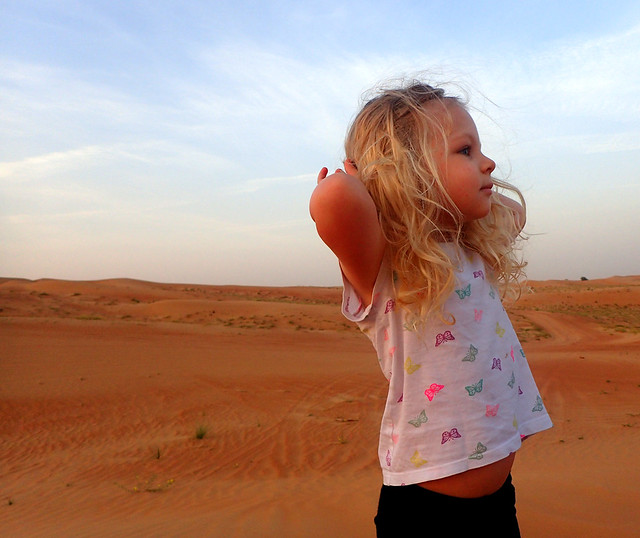